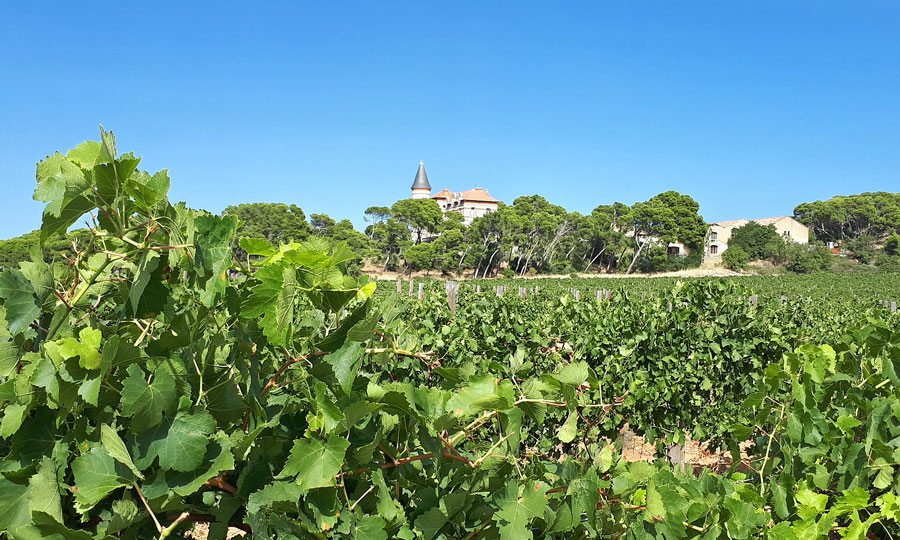 In the southern limit ofAOP La Clape, Chateau Capitoul is a property of Bonfils vineyards very expressive of the Mediterranean identity and seafront wines.

A balcony overlooking the sea

At the gates of Gruissan, at the foot of the massif of La Clape, stands the silhouette of Chateau Capitoul. Arriving from Narbonne, the vineyard which borders the road already announces the presence of the building before it stands out against the sky, dominating the landscape. Located on a promontory flanked by 64 hectares of vines, it offers a panoramic balcony overlooking the sea horizon, the nearby ponds and the neighboring Pyrenees. Garrigues and parasol pines give the place a Mediterranean authenticity accompanied by the song of the cicadas. If the castle takes on the style of the XIXe century, the site itself has been a wine-growing area since Roman antiquity where vines already flourished there. Today it is one of the centerpieces of Bonfils vineyards. Under their leadership, Chateau Capitoul is about to become a major wine tourism complex, which will soon welcome 45 vineyard houses set in the countryside.

Chateau Capitoul inherits its name from the XVe century when the chapter assembly of the Canons of Narbonne oversaw the exploitation of the vineyard. History and landscape form here a remarkable whole to which the Bonfils vineyards make sure to restore prestige. On the vineyard itself the encépagement testifies to the specificities of the'La Clape appellation. Marrying the reliefs which mark the southern limit of the appellation, very close to the pond of Gruissan, the vine is imbued with maritime influences to give substance to wines distinguished by iodine and mineral signatures. Syrah, Grenache, Carignan or Mourvèdre contribute to the definition of red wines. Bourboulenc, Marsanne, Roussanne, Grenache blanc or Viognier provide their typical characteristics to white wines. The cellar was designed by a previous owner as a naval architecture. It makes all the originality of this place of breeding where the equipment in concrete vats announces vinifications concentrated on the fruit.

The aging in vats determines the line of wines. When the cuvées of Chateau Capitoul call on barrels, the woody character is discreet. Giving the fruit its full intensity is the determination of the cellar master. Range rocaille, vinified in white and red, comes from a selection of old vines. In its red wine version, Syrah, Carignan and Grenache infuse it with a complex structure of black fruits and spices. In the white wine version, the partial passage in barrels leads Marsanne, Roussanne and Viognier to combine their aromatic concert with woody finesse. With Gold, the concentration and the complexity of the old vines determine this cuvée, also available in red wine and white wine aged in barrels. Strength of fruit, velvety and melted tannins enhanced with toasted notes make the personality of the red wine. For the white wine, it is the notes of exotic fruits with lemony accents, nodding to the truffle aromas, which the aging comes to enhance. With Maelma, an exclusive vintage, the Mediterranean signature takes on a scale sublimated by the process of integral vinification. The Syrah, all in red fruits and spices, comes in search of the roundness of the Grenache while the Mourvèdre accentuates the personality of this exceptional red wine. Seductive singularity joining the whole, The Forgotten take advantage of the passerillage and a 36-month aging in new barrels to offer a sweet wine that Chateau Capitoul only produces the great years.