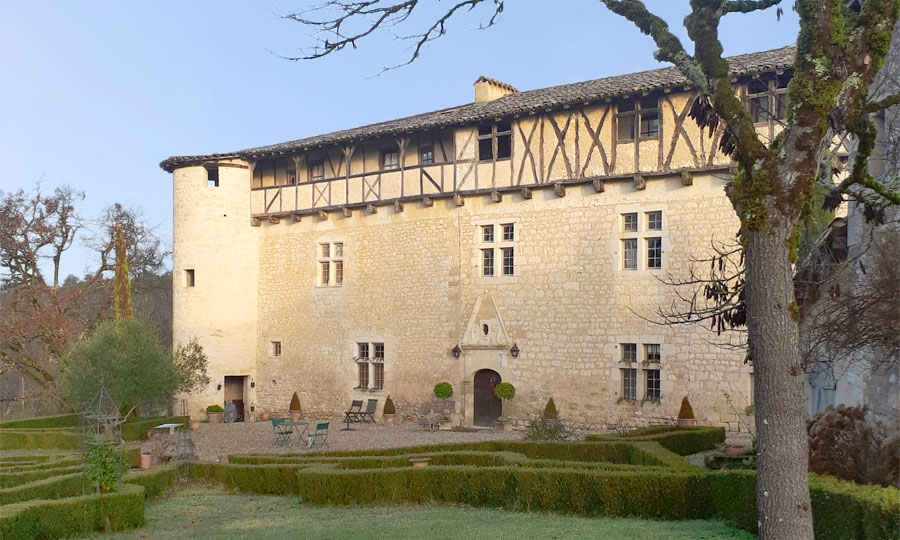 Built on a very old area of Gaillac vineyard, Mayragues Castle is already in itself an architectural pearl of the XNUMXthe century perfectly restored. Examples of biodynamic viticulture, the Gaillac wines which are produced there are at the same time a creative, coherent and controlled expression of the appellation.

A pioneer estate in biodynamics

When Alan and Laurence Geddes acquired the Mayragues Castle in 1980, the building was in ruins. The work of XIIe century, rehabilitated during the Renaissance, had no more roof and framework than the sky and its clouds. So began a restoration project which was accompanied by the takeover of the wine estate. The vines were then populated only with hybrids dedicated to the massive production of table wine. The radical decision was necessary: Alan geddes proceeded to uproot characterless vines to restore native grape varieties such as the Braucol, Duras for red wines or the Mauzac dedicated to white wines. And as man had a sense of anticipation, he established himself as a pioneer of organic and then biodynamic agriculture in the Gaillac vineyard. The first cuvée was bottled in 1982. From then on, the work did not stop.

Between elegance and consistency

The vines of Mayragues Castle extend over 13 hectares. They occupy the heart of a larger domain where 90 hectares of groves and fields ensure their protection. Today it's Duncan geddes, the son, who oversees the entire operation. Anne Geddes, his sister, has also taken over and is supporting him in the management of the estate. Their passion is identical to that of their parents. They watch over their wines as the whole family has watched over the château, whose perfect restoration is already a work in itself. Centerpiece of the architecture of the place, it enhances by its historical presence the nobility of the work carried out here. Because the wines of Mayragues Castle are raised not only in respect of an ancestral land, but they also reveal an elegance and a coherence in perfect expression of the history and the place.

In the cellar Gaillac wines are aged in vats or barrels. The range is structured in two red wines, two dry white wines, a sweet white wine and a sparkling wine from the ancestral method. From time to time and according to the interest of the vintages, a red wine or a rosé wine completes the winemaking work. All of them highlight the characteristics of the Gaillac appellation: the white wines are vinified in 100% Mauzac or 100% Loin de l'Œil. Red wines including The Magi or even 23° Fahrenheit are the result of marriages between Braucol and Cabernet sauvignon for one or Braucol, Duras, Syrah and Cabernet for the other. The Brut from Mayragues, sparkling wine produced according to the ancestral method, is expressed in 100% Mauzac. Sweet wine Mayragues cuvée, aged in barrels, is the pure expression of Loin de L'Œil, whose careful choice of acacia wood preserves the aromatic integrity. In this concert a superb sailing wine slips in secret, theAmber from Mayragues, sometimes 100% Mauzac, sometimes 100% Loin de l'Œil depending on the vintage. More subtle still, Spirit of Mayragues which is a brandy distilled at Laurent Cazottes, sublimates the whole. Sincerity and passion, power and velvet, reign in each of these wines. They are the fruit of a family spirit in which generosity, courage and accuracy are expressed spontaneously. These qualities stand out perfectly in the elegant handwriting that marks the wines of the Mayragues Castle.