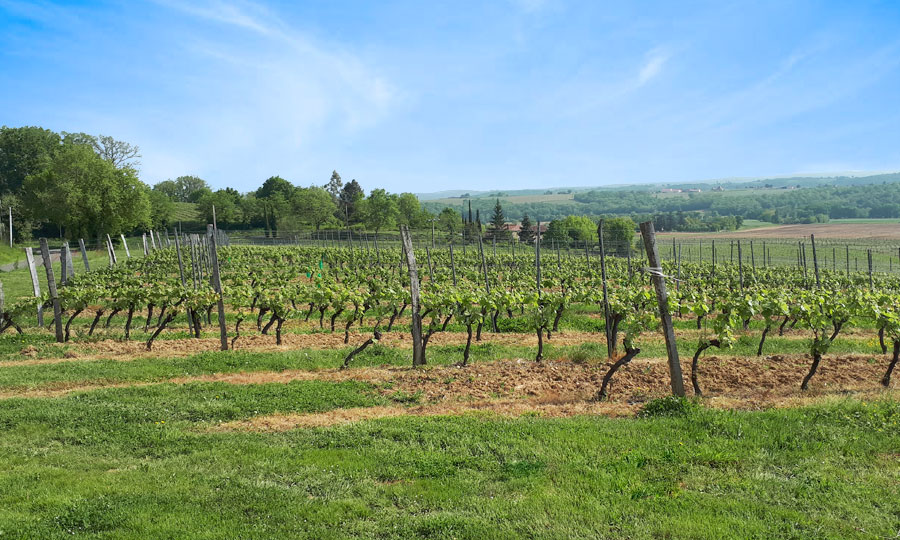 In Viella, in the Madiran vineyard, the Château du Pouey enjoys one of the most favorable terroir. Bastien Lannusse, a talented young winegrower, vinifies there under three appellations: Pacherenc-du-Vic-Bilh, Madiran and Côtes de Gascogne.

Up there on the hill

Built on a ridge, Pouey Castle occupies a dominant position on the landscape of Madiran. The estate takes its name from an Occitan expression commonly used to name the top of a hill. Here, the vines tumble down in well-drawn lines the supple hills of the town of Viella. Four generations of winegrowers have followed one another. Bastien Lannusse has taken over since 2012 the torch passed on to him by his father, Pierre Lannusse. The first decision of the young winegrower was to break with the cooperative economy, until then in tradition, to lead his own winemaker adventure. He produces from his own bottles, exploring with rigor and finesse the resources offered by the opportunity to be established in three appellations.

Pouey Castle enjoys exceptional soil in Madiran. No less than three terroirs qualify the 24 hectares of vines. On the clay-gravelly slopes well exposed to the south, the Tannat, flagship grape of Madiran, largely dominates. It coexists there with Cabernet Franc and Sauvignon. Lower down, in falling slopes, the large and small Mansengs wisely occupy a clayey-silty terrain. A plot of clay and pebble substrates completes the whole in an enclave located in Arroses, in the Pyrénées Atlantiques. The wines produced by the estate enjoy both an ideal terroir for Madiran and the geographical opportunity to also overlap the Pacherenc-du-Vic-Bilh appellations and Cotes de Gascony. The remarkable terroir of Pouey Castle, valued by the talents of Bastien Lannusse, produces wines regularly noticed in guides and competitions. It must be said that the young winegrower was able to position himself very quickly in the minds of his generation.

Taking the opposite of the tradition of woody wines by Madiran, Bastien Lannusse produces a Tannat well established on the fruit, perfectly mastering the tannic inclinations of the grape variety. The named cuvée Bastien, a 100% Tannat matured in vats for a year and a half, is the most demonstrative expression. This taste of the fruit fixed in its crunchy and fresh aromas is happily cultivated in white, red and rosé vinified in Cotes de Gascony under the aptly named label of Happy time. As to Pacherenc-du-Vic-Bilh, this is the vintage The Aydasse which pushes him towards his most blooming bouquets and his mouth. Summoning a blend where Petit Manseng powerfully dominates Fat Manseng, this mellow wine from a late harvest reveals a sweetness tempered with freshness, where quince and candied fruit sing together. This cuvée takes its name from Occitan help which is used to name the passion. And of ayde for Bastien Lannusse wine is not lacking, suggesting a very bright future for the next vintages of Pouey Castle.

The Madiran vineyard draws its specificity
from a native grape variety of the Pyrenean foothills: Tannat