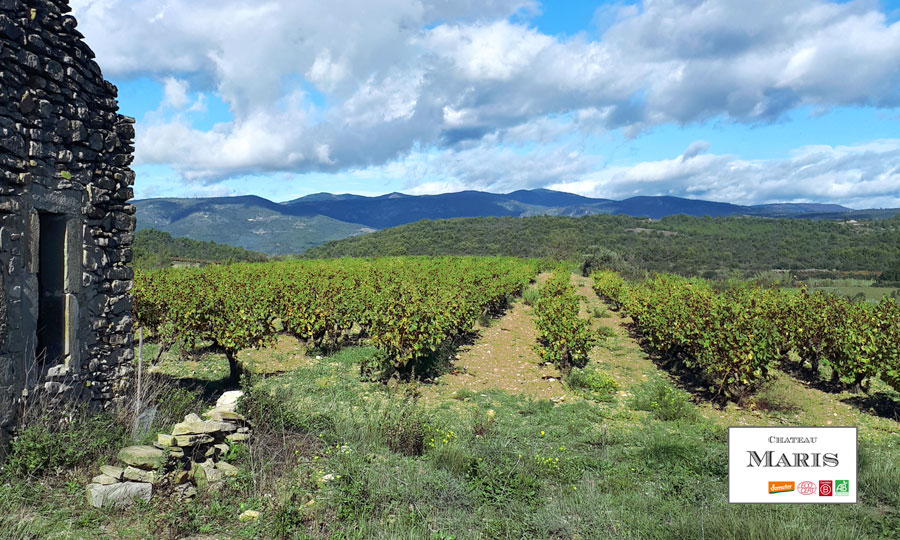 Fruit of the collaboration that unites Robert eden et Kevin Parker, Chateau Maris located in Minervois La Liviniere is one of the pioneering areas of biodynamics in Languedoc. The wines produced by the estate are distinguished by the authenticity and veracity of their profiles.

The choice of ethics

When Robert eden et Kevin Parker acquired Chateau Maris in 1997, they had only one motivation: to produce highly qualitative wines in Minervois La Liviniere. United by a common ethic, they oriented themselves first of all towards a sustainable environmental approach. Their priority was to restore the natural fertility of the land. To this end, they adopted the principles of organic and then biodynamic viticulture. Pioneers in this field, they soon noticed that biodiversity was regaining strength in the soil. The benefit was just as evident in the vines, which gradually regained their natural robustness. The gain in vitality very quickly had an impact on the quality of the grapes. Today, it guarantees the ethics and authenticity of the wines produced by Chateau Maris.

The truth of the land

The vineyard of Chateau Maris extends over 32 hectares distributed in small plots. Interspersed with natural areas, they follow the well-exposed hillsides on which the village of La Liviniere. The vineyard is managed according to a set of certifications which frame the environmental commitment: Bio since 2002, Biodyvin from 2004, Demeter and in 2008 Bbody since 2016. The example has also focused on the cellar next to a former Visigothic chapel. With an innovative envelope made of thick hemp walls, covered with a green roof that blends into the landscape, the building was built according to the most demanding energy and environmental standards of the moment. The major benefit of the approach is to have restored to the terroir its ancestral integrity. It translates into full authenticity of expression in the wine. Because the soils restored to their natural vitality give the vines and especially the grapes the qualities and aromatic potential expected from the most demanding of winegrowers.

The veracity of the wines

The wines of Chateau Maris raise a major stake: to make the vintages of the domain a translation as faithful as possible of the expressive palettes of the vineyard. The exceptional terroir of the cru Minervois La Liviniere is thus served by a care of the vines and a respect for the soils which restore its deep authenticity. Each wine adopts a unique signature whose intensity matches the imperative of sincerity. Among the reds, Syrah and Grenache find their optimal expression with the cuvées Las Combes, worked in spontaneity, or La Touge, matured into complexities. The elegant Syrah from a 3 hectare plot occupies the entire scene with The Planels which reconciles aging in vats and maturation in oak barrels. With the cuvée zulu, Grenache comes to convene alliance with Syrah. On the white register, roar opens a chapter on Grenache gris. All in freshness and aromatic tensions, this cuvée grows in complexity by frequenting the oak barrel for 10 months then relayed by 6 months of ovoid tank. Always summoning the Grenache gris and red, the rosés Blushing Nymph et Nymph Rose complete the captivating and virtuous expression of Château Maris wines.

Considered one of the premier crus of Occitanie, the Minervois la Livinière appellation is a land of highly qualitative wines.