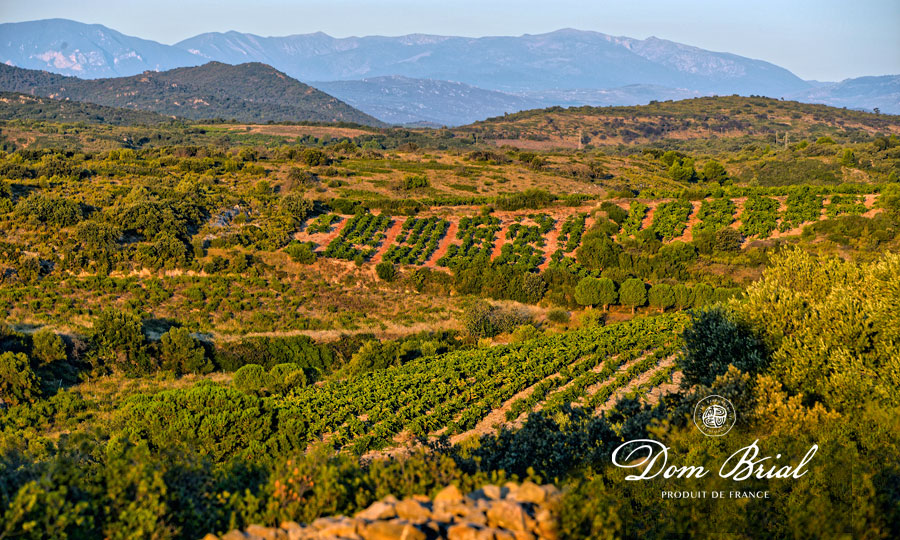 In Baixas en Roussillon, the house Dom brial testifies to the vitality of winegrower groups in Catalan country. Its production is available in three worlds where red, white and rosé wines are present as well as natural sweet wines.

History Dom brial is deeply rooted in the wine tradition of Roussillon. The collective of winegrowers came together in 1907 at the time of the memorable vineyard crisis. From the historical grouping, the current structure was born in 1923. She took the name of Dom brial in homage to this monk and Benedictine historian of the XVIIIe century which was a benefactor of the village community. The strong expression of a local identity, which is above all that of the soil and the climate, has been the unifying force of the winegrowers. Today, nearly 250 of them are passionately helping a 2100 hectare vineyard. The natural sweet wines, of tradition on the terroirs of Roussillon, deploy fine vintages there. But since the region benefits from the appellations reserved for red, white and rosé, these are now inseparable from the quality signatures of the house.

At Dom brial, the tasting room reflects the structure of the wines and the terroirs which come in three worlds. Three showcases showcase them, starting with the collection Dom brial herself. To this is added the collection of vintages from Chateau les Pins as well as the singular rosé Rozy, a universe and a story all by itself. Varieties of soils, geographical distribution of vineyards and breeding methods allow a variation of wines on several appellations: Coasts of Roussillon, Coasts of Roussillon Villages, Rivesaltes, Muscat de Rivesaltes, and on a larger scale, Catalan coasts. If we associate the wines of Roussillon with reds where Grenache has pride of place, it turns out that the territory of Baixas is also a beautiful white terroir where the Grenaches blanc and gris, Roussanne, Marsanne and the Viognier. Let us add to the inventory of grape varieties the Muscat à petit grains, whose aromatic potential will just as easily accommodate the Muscat de Rivesaltes itself as rosé Rozy he discreetly marks the merry bouquet.

In the universe Dom brial each appellation finds its range. The Côtes du Roussillon of course with The Embrace in three colors and Mirade in white. Mirade red marks the entry into the Côtes du Roussillon Villages whose typicity becomes denser with vintage vintages from the vines of Crest Small. This terroir acquired in the 2000s, predominantly limestone, has as an ambassador a red wine reconciling beautiful freshness and length in the mouth. Made from 80% Syrah and 20% Grenache, matured in demi-muids for 12 months, it is certainly one of the signatures with a strong identity of Dom brial. This expertise and this know-how of the winegrowers are found in the entire range of wines in the universe. Chateau les Pins, no longer inscribed in the heritage memory. The art of the vintage then returns to Rivesaltes Grande Reserve. The number 9 holds a very special place there where since 1959 the tradition of highlighting each decennial cuvée has been perpetuated: 1969, 1979, etc. Interspersed with other intermediate dates, this collection of Rivesaltes is certainly unique and exciting to explore. The vinification of Rivesaltes also generates a very unique cuvée, built on this tradition which consisted in maturing under an oxidative regime the balance of musts that were not mutated. Relative of that of sailing wines to yellow wines, the technique generates a Dry Rancio which is a taste and aromatic experience in itself. As for the search for bouquets full of freshness and tinted with the Catalonia sun, it is with the Muscat from Rivesaltes signed Dom brial ou Chateau les Pins that it finds material.