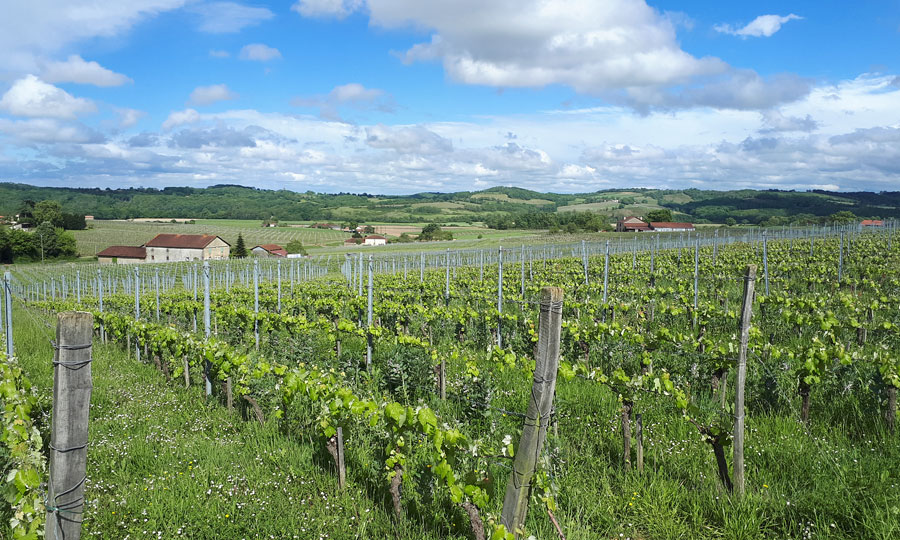 Au Domaine Capmartin, in the Madiran vineyard, a particular style emerges. Vinifying in a spirit which reconciles respect for the environment and a new expression of the terroir, Simon Capmartin gives body to particularly seductive wines.

If you Madiran vineyard has won its reputation with wines of character, a generation of young winegrowers is revisiting the appellation's usual landmarks. They give the Tannat, the typical grape variety of the terroir, a new dimension full of freshness. Simon Capmartin is one of those. Firstly, because it leads the cultivation of its vines with an ethical commitment: labeled organic since 2013, it pushes environmental respect even further by coming closer to the principles of biodynamics. Then because the landscape evolution in Domaine Capmartin is constant. Biodiversity is a priority. If its vines benefit from a nourishing and protective plant cover, the vineyard is also enriched by protective fringes where the establishment of fruit trees is gradually denser.

Le Capmartin domain enjoys a land of 20 hectares spread over hillsides. The clay-limestone soil sees the emergence in places of a mother rock that the ancients exploited in the form of a quarry. A convent later settled on the site and now gives its name to a few cuvées. The wines are included here in three appellations: Madiran, Pacherenc-du-Vic-Bilh et Cotes de Gascony. The terroir produces well-structured wines, the Capmartin domain containing plots of old vines, some of which date from the pre-phylloxera period. For the reds, the Tannat typical of Madiran there is largely dominant, supported by Cabernet Franc and Sauvignon. For the whites, this Gascon terroir brings together large and small Manseng, small Courbu, Syrah, Chardonnay, Sauvignon gris and white. In order to base the wines on aromatic potential, density, maturation and controlled yields are the rule.

Wines on the fruit

Au Capmartin domain, the aging in vats serves a typicality anchored in the fruit. The three appellations vinified by Simon apply to this bias. The cuvée 100% Tannat, without added sulphites, is the most demonstrative expression. Breaking with common woody alliances in Madiran, it enhances the aromatic bouquet of the grape variety while demonstrating that its tannic reputation can be tamed perfectly. This spontaneous French wine coexists with other cuvées aged in the tradition. TheSpirit of the Convent, a Madiran slowly matured in new oak barrels, is indicative of this style which reconciles fruit and freshness with silky tannins. In Pacherenc-du-Vic-Bilh, the opening is a dry white dominated by the aromatic freshness of Gros Manseng, then delicately accentuated by bursts of citrus fruit of Petit Manseng and the flowery finesse of Petit Courbu. In a soft version, the Cuvee du Couvent made from 100% Petit Manseng combines a rich sparkle of candied fruit with the toasted notes of barrel aging. If we add to the catalog the wines produced in IGP Côtes de Gascogne, we will understand that the Domaine Capmartin enjoys a beautiful expressive amplitude, enhanced by a virtuous environmental approach.

The wines of Madiran