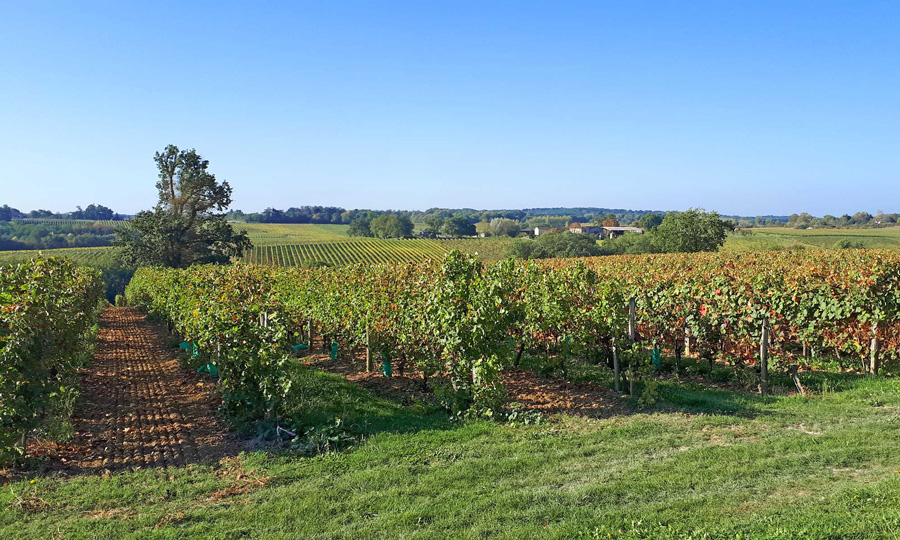 Located north of the Gers, in the natural region of Ténarèze, the Domaine Chiroulet is a family story, that is to say a story of generations who have been able to enhance the generosity of their wine-growing land.

Today driven by the dynamic action of Philippe Fezas, the son, the adventure of Domaine Chiroulet started with Michel Fezas, the father. Of Michel we could say that he is the living history of the vineyard, of Philippe that he has the enthusiasm and passion for heritage. The vines extend over the sunny slopes of Larroque-sur-l'Osse, a village which takes its name from the small river that runs through the valley. The property is located a stone's throw from the Saint-Martin d'Heux church, a superb XNUMXth-century buildinge century erected at the top of the hill. The altitude is light: it rises to one hundred and eighty meters, which guarantees the vines a beneficial hint of freshness. The territory itself is subjected to the breeze coming from the Pyrenees which it faces. Sometimes forcing up to be heard, we will understand that the site of Chiroulet takes its name from Occitan xirula which designates the whistle. The movement of the breezes is fairly constant and blends with the virtues of the sun so that a typical grape variety matures with benefit. Cotes de Gascony.

The grape varieties of the Chiroulet estate

On these lands of the Gers, the production of elegant white wines from grape varieties rich in aromatic thiols is traditional. In the vineyards of Domaine Chiroulet thrive on colombard,ugly, Worm, Sauvignon blanc and gris. To these are added the Gros and the Petit Mansengs, pillars of local winemaking. Here they found in the Sauvignon an ally perfectly suited to the limestone soils of the domain. Because the terroir has qualities similar to that of Sancerre or Pouilly as well as Philippe Fezas was able to see it thanks to the expertise of his friend and geologist Pierre Chevalier. Twenty-five million years of limestone sediments and fine clays contribute to the favorable composition of a benevolent soil for the vine. But to Domaine Chiroulet we also know how to distinguish ourselves by anticipation: Michel, the father, understood very early on that omitting the red grape varieties was not compatible with the resources of such a land. Since then, the estate has also relied on the presence of Merlot, the king grape variety of Saint Emilion, accompanied by Tannat local and Cabernet franc.

Wines aged in Domaine Chiroulet have a whole history that goes far beyond local notoriety. The first impulses are even surprising: the wines of Domaine Chiroulet first found their biggest export enthusiasts, especially since the Parker guide mentioned them in its 1996 edition. Philippe Fezas, no one was a prophet in his country. But the estate has long since reconquered the lands of France and today finds its allies with more than five hundred wine merchants. The international adventure does not weaken any less: selected in 2017 by American Airlines for his vintage White lands, the production of Domaine Chiroulet is also successfully exported to Japan. It must be said that the range of products from the cellars is both precise and perfectly worked with the vigilant help of Nicolas Cambos, the cellar master of the estate. The variation includes the traditional dry and soft whites of Cotes de Gascony, exceptional red wines on this terroir, Armagnac vintages and the famous Gascogne floccu assembled on the property. The distinctions and medals regularly honor the fruit of this work in the vineyard and in the cellar, carried out with ancestral knowledge as well as technical passion by the two men of the Fezas house: Michel, the father, and Philippe, the son.