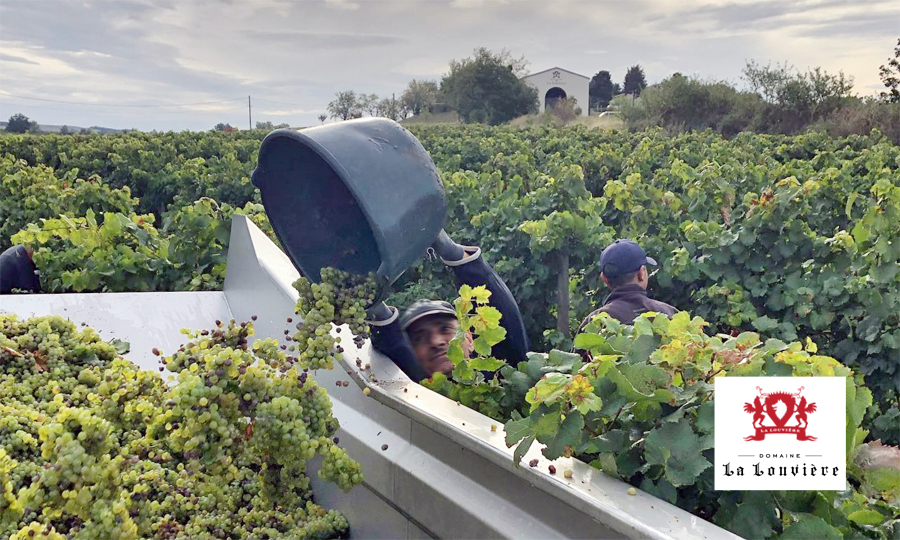 Le Domaine La Louviere ennobles the way of making and thinking about wine by projecting the toponymy of the terroir and its ampelographic resources in an oenological story shaped by imagination and sensuality.

On the Malepère vineyard, near the village of Malvies, Is the Domaine La Louviere. The site looks like a small hamlet located on a hill that dominates the surrounding landscape. If the altitude of two hundred meters remains modest, it is all in all sufficient to give the place its air of sentinel. Because since Domaine La Louviere the gaze easily embraces the expanse of the vineyard which gently descends from all the surrounding slopes. And if one lets oneself be inspired by the toponymic evocation, one can easily imagine that from this culminating point one could observe the presence of wolves in more remote times. Because La Louviere literally evokes the animal, reviving at the same time the imaginary fantasy that accompanies it. This is how when, from Germany, the Grohe family became the owner of the estate, she made the wolf and the she-wolf the key figures around which the spirit of the place was built. The decor being set, it means that the wines produced in Domaine La Louviere are going to be told as much as they are going to be tasted.

Where the hill becomes a vine

Let's first come back to the land. In the Malepere it is divided into four sectors, each of which has its own geological and landscape characteristics. At Domaine La Louviere it is at the heart of Razes, all patterned with gentle hills and valleys, that one finds oneself. Due south, in the background, the Pyrenees chain cuts out the horizon. The plots of vines extend all around the residential hamlet from which the friendly but changing relief irresistibly invites you to walk. the Domaine La Louviere, it is a world in itself where the personified shadow of wolves is omnipresent. On the site itself, their main intercessors are jem harris, oenologist and main manager, assisted by Corinne Baute, who is in charge of commercial management. Both are promoters of the setting and the production, watching over the quality of a vineyard where a typical grape variety of the terroir of the Malepère. Because pleasures, Temptations et sins which ferment here, first find their legitimacy in the care given to the red and white grape varieties which preside over the development of the best juices.

Where the wines court

Au Domaine La Louviere, no cuvée that would not leave you without a stir. The spirit of vinification is first and foremost evident in three collections: the pleasures, Temptations and sins. The wine therefore promises to be carnal and each cuvée announces its personality through its label. Each one is distinguished by a personified figure with the head of a wolf, male or female, dressed in a subtly eroticized period costume. If the wine usually tells itself, at the Domaine La Louviere it is rather a story, with an assertive sensuality. Bringing together two white wines and a red wine, the pleasures become ambassadors of theIGP Pays d'Oc in three characters: The Libertine, The Galant and The Rascal. When the dress changes to rosé, it is the Marquis who enters the scene, wearing the colors of the Malepere. When the courtyard reveals itself further, come to the fore Temptations, with The mistress et The Seductress, both similarly issued from the stronghold of the Malepere. Their seductive finery favors the affirmation of red fruits with velvety tannins, dominated by Merlot, Cabernets and Malbec. They form a trio with The Muse coming from theIGP Pays d'Oc, whose inspiring blondness reflects the combined character of Viognier, Chardonnay and Chenin. The swing in Peaches, concentrated sensuality of the highest rank, is announced by the arrival of The Sovereign and The emperor. The first reigns over theIGP Pays d'Oc, and gives all its nobility to a pure Chardonnay of high extraction. The second imposes itself in PDO Malepère, pushing to the highest and most accomplished expression the trio of Merlot, Cabernet Franc and Malbec.