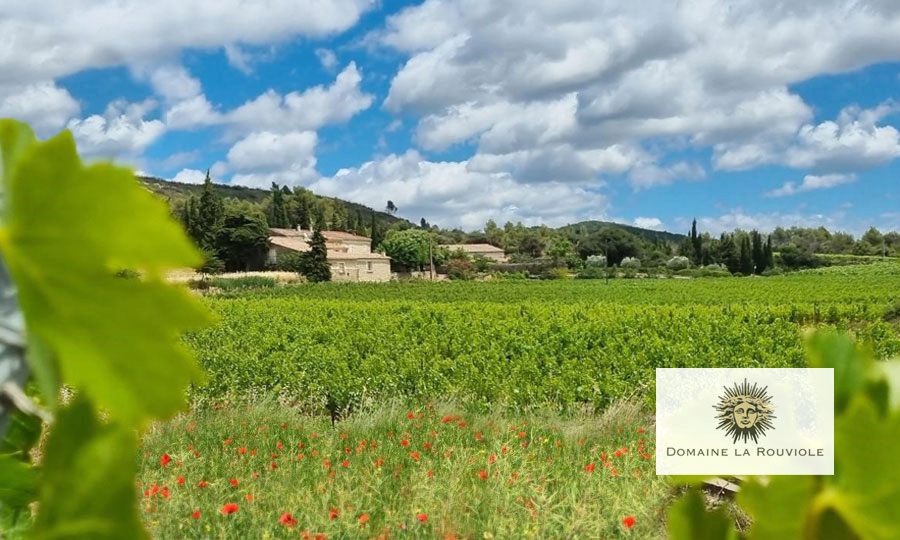 Located to the north of the appellation Minervois, Domaine La Rouviole enjoys an environment whose botanical richness and belonging to the cru Minervois La Liviniere foreshadows a highly qualitative winemaking potential.

At the foot of the Petit Causse

Le Domaine la Rouviole clings to the first foothills of the Haut Languedoc Regional Park which dominates to the north the village of Siran. La Livinière, a small town that gave its name to the cru Minervois La Liviniere, is only two kilometers away as the crow flies. Rooted in the terroir of this exceptional cru, the vineyard takes its name from the stream of Rouviole which once flowed here. On its northern limit, the domain rests on the southern slopes of the Small Causse. This is characterized by the botanical diversity of its scrubland which runs down to the bottom. Here the vines are embedded in stands of thyme, lavender, rosemary, almond trees, fig trees, cherry trees, holm oaks and even olive trees. The average altitude of the clay-limestone layers where the vineyard draws its lifeblood is around two hundred meters. At this place, the solar character of the terroir is tempered by the freshness that descends from the surrounding reliefs at nightfall.

On the land of La Livinière

On the 26 hectares of vines enveloped by 10 hectares of scrubland typical of the Petit Causse, the dominant grape varieties are Syrah, Grenache and Carignan. The first two contribute more particularly to the structural identity of Minervois wines et a fortiori to those falling under the quality requirements of the vintage Minervois La Liviniere. The estate's ampelographic inventory also includes Cinsault for red wines, as well as white Grenache and Rolle, which open up new perspectives for the production of white wines. On the vineyard which is staged between 200 and 250 meters above sea level, it is the highest plots which are reserved for the production of red wines produced according to the highest requirements of the La Livinière cru.

The profile of the wines was built over the years following the arrival of Franck Léonor on the Domaine La Rouviole. Indeed, after joining his uncles in 1998, he contributed early to the organic conversion of the vineyard, which has been certified since 2011. As for the spirit of the wines, most refer to his passion for the game of chess which inspires their names. . This is so for The Shepherd's Blow, an inaugural tactic that introduces a cuvée in IGP Pays d'Oc where Cinsault, Carignan and Syrah play together. Switching to Minervois, the vintage Baroque put on Syrah, supported by Grenache and Cinsault. Betting on spontaneity, on time seeks the expression of a Minervois where Syrah and Grenache rely on evocations of scrubland and the mineral base of the terroir. In the same spirit, The Regency uses the same duo and adds a touch of Cinsault which pushes concentration and complexity further. As for the exceptional figure, it takes the name of the nymph Caissa, in reference to the poem by William Jones: Caissa or The Game of Chess. Built on the alliance of Syrah and Grenache, acquiring balance and complexity over aging in barrels, it advances in Domaine La Rouviole as the highest expression of the vintage Minervois La Liviniere.