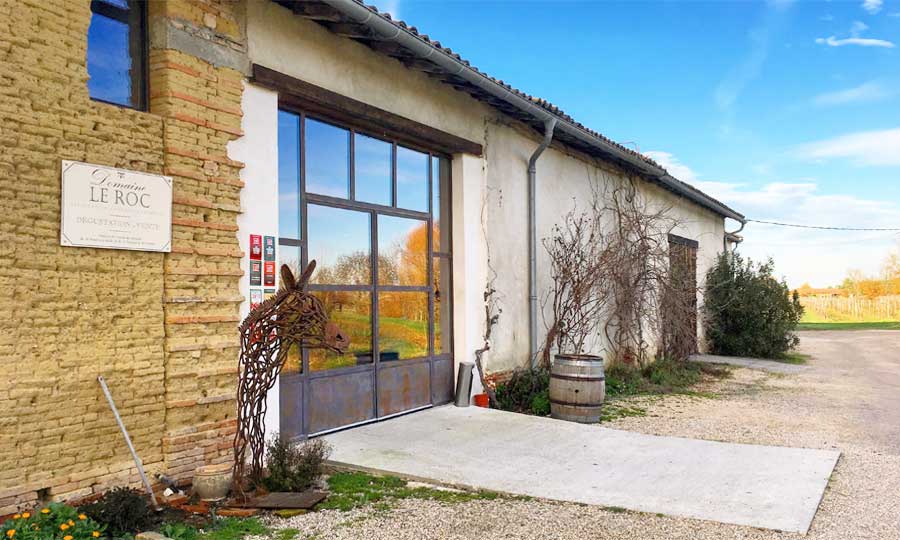 On the vineyard of Fronton, the Domaine Le Roc enjoys a good reputation for its wines of character signed by the whole Ribes family. Labeled "Vignobles et Découvertes", committed to organic conversion, the estate is also distinguished by its generous hospitality.

Le Domaine Le Roc is established on the traditional lands of the wines of Fronton and Villaudric. Frédéric Ribes, winemaker keen on history, cultivates the memory. It applies to remember that in medieval times the vine was planted there in crowds, an arrangement that favored genetic crossings. Driven by their sagacity, the winegrowers learned to select the most suitable vines for this gravelly boulbènes soil. It is this work of man observing nature that engendered Négrette that we also call Mad Black Woman, the endemic grape of vineyard Fronton. This was used for a long time to produce wines for export. The waterways of the Tarn and the Garonne then facilitated their transport to Bordeaux. The vineyard was upset in 1956 when a terrible frost decimated it. The use of hybrid plants made it possible to restore quantitative production. But the notoriety of the wines of Fronton and Villaudric paled for a long time.

The AOC acquired in 1975, the challenge of the vineyard of Fronton was to restore the notoriety of its wines. We began by replanting the vines to give back to the Négrette his favorite territory. This rustic and well-adapted grape variety is today at the heart of the production of Domaine Le Roc. The entire Ribes family, including the young generation, is committed to vinifying it. We don't call ourselves Le Roc by chance and the wine produced by the family estate expresses its character. The cellar itself speaks volumes. In this building surrounded by thick walls, on a semi-buried ground, vats, barrels and casks are deployed in tight rows. At the back, under the high vault, the local cold meats are displayed on racks. The staging is no accident: when Frédéric Ribes talks about wines from Domaine Le Roc, he always insists on the dishes with which they would know how to marry.

In the Ribes family there is a creed: “ Southwestern wines are accomplished when tasted with a meal ". So the appetizer begins with two cuvées signed by the young generation of Anne Ribes and her cousin Grégoire: a fruity red named The Little Pebbles and the pretty rosé Ninette. Comes next la Folle Noire d'Ambat, a 100% Négrette where the typical aromas of violets and liquorice are supported by a slightly tannic structure. The recommendation for this one is to nibble on local cold meats. With the cuvée Le Classique, where the Négrette combines in matter and tension with the Syrah and a hint of Cabernet, we would rather call for white meat dishes. Red meat lovers will find a more robust ally in the cuvée Roc. In this wine the Négrette makes a solid and fair marriage with the Syrah and the Cabernet Sauvignon, the whole wrapped in a balanced woody acquired by two years of aging in barrels. As for the flagship of the estate, it is heroic by borrowing the epic name of Don Quixote. This flagship cuvée, complex in aromas, brings together all the virtues of Négrette and Syrah, which punching down and aging in eighteen-month tuns will have pushed to their most solid expression.