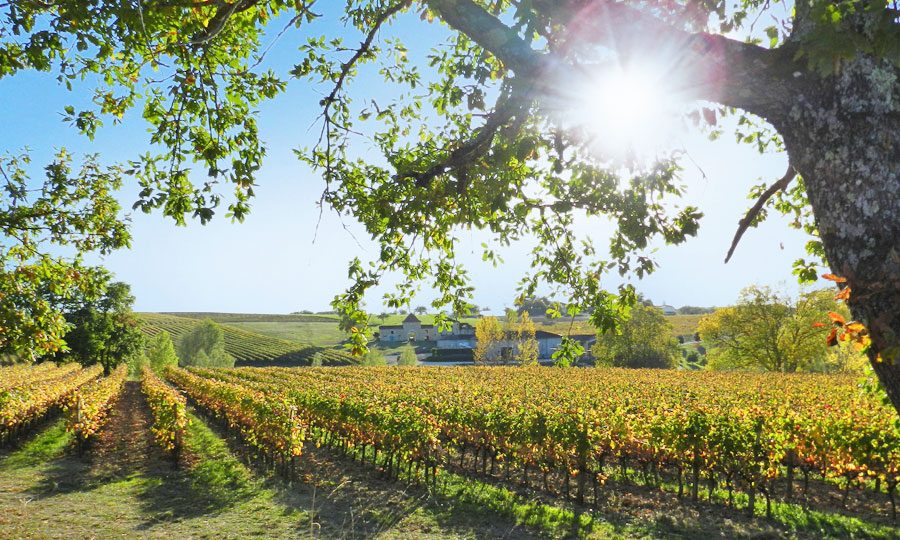 North-west of Condom, at the convergence of the lands of Agenais, Lomagne and Ténarèze, rises the fortified village of Gazaupouy. Between these historic walls it only took a step for the wine estate today managed by Silas Marcellin to adopt the name of Domaine les Remparts. The geographical site and the surrounding terroir are decisive for the atmosphere of the place and the spirit of wine production. Because the earth straddles a territory where the vineyards dedicated to the production of wines from Cotes de Gascony, ofArmagnac and Floc de Gascogne alongside plum orchards. From these, Silas Marcellin also takes the best advantage of prunes, which have become an excellent ally of his Armagnacs. The winery itself does not sit near the Gazaupouy window. It is located in the heart of the vineyard, at a place called Bourdilet.

The architectural ensemble, where the winemaking cellar is next to the Armagnac cellar, stands out at the end of a path that winds through hilly land. The entrance is marked by the presence of four flags flying high on their poles. They wear the colors that honor the territory as much as the estate staff. Thus, between the tricolor flame on one side and the Occitan cross on the other, the Basque and Polish flags also flutter in the wind. Below, all around a small lake, 43 hectares of vines run on the hillsides. Particularity of the terroir and exception in Cotes de Gascony : the red grape varieties are well represented there. Tannat, Malbec, Merlot and Cabernet cheerfully frequent Colombards, Petit Manseng and Sauvignon. At Domaine les Remparts the vinification of each grape variety benefits from a fine infrastructure in concrete vats. Favorable to the stability of the maturing, they give the cuvées a well-established dominance of fruit and freshness.

On a Gascon R

The signature of the terroir is affirmed in the foreground: the range On a R Gascon no less than six variations. Exploring the nuances offered by the coexistence of reds and whites, a 100% Malbec matched with a Merlot Cabernet alongside a rosé Merlot; Join them a Colombard and a Sauvignon. Then the alliance of the last two in a Colombard / Sauvignon cuvée concludes the range. Everyone has the same disposition: to open up each time on a party R. To this festive collection is added the luminous elegance of the trio Moon Drops. With this one, subtle marriages come to affirm the potential richness of the soil. This is how Malbec and Tannat converge in a first cuvée full of fruit and structure. The other two honor the aromatic radiance of the whites with a 100% Petit Manseng and a Sauvignon / Petit Manseng. On the side of the cellar ofArmagnac, the vintages are in the spotlight. Their patiently matured bouquets recall each year, from the 1971 distillation to the most recent. The Gascogne floccu meanwhile, whose rosé version is based on the aromatic richness of Merlot, has earned the estate a recent distinction at the Concours Général Agricole.