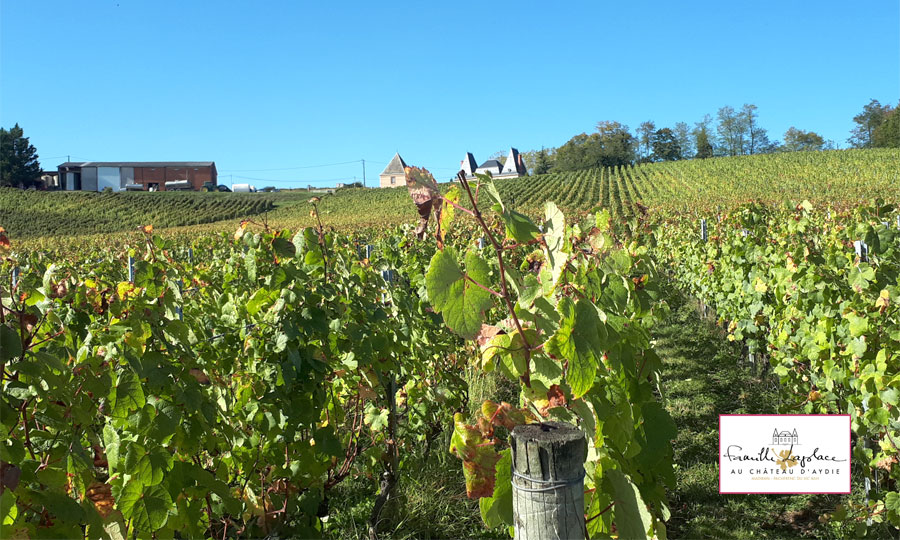 Au Aydie Castle en Madiran the wines are built and claimed as a signature steeped in history and know-how: that of Laplace family.

A large family from Madiran

At the crossroads of Gers, Hautes-Pyrénées and Pyrénées Atlantiques is held the Aydie Castle. In this place which dominates the landscape is established the Laplace family. She has cultivated vines there for three generations. The story takes root at the very beginning of the XXe century with the first winemaker of the line: Frédéric Laplace. Experimenting with the resources of the vine, he innovates by creating a mistelle made from Tannat musts fortified with brandy. The wine boom comes in the second generation where the first bottles of wine produced by Pierre Laplace are quickly noticed by the famous Gascon chef André Daguin. Among the Laplaces, the land is sacred. The third generation contributed to its development by extending the plot of Tannat. She thus made this grape variety king in Madiran an expressive revealer of each floor.

Around Aydie Castle the soils are hilly. The Tannat vines are spread there in sheets on the hillsides. The high density is privileged on the vineyard. The grapes thus constrained to low yields develop a concentration of juices and complexity of aromas at maturity. The plots reserved for the production of Madiran rub shoulders on other slopes with the Petits and Gros Mansengs. They are intended for the development of Pacherenc-du-Vic-Bilh which also convey the character of the estate. The expressive profiles of wines aged in Aydie Castle are the result of alchemy. The expressive nuances of the terroir, the influence of a climate shaped by the meeting of the Ocean and the Pyrenees, all sublimated by the notorious and historical know-how of the region contribute to their definition. Laplace family.

The Madiran to the Laplace family are distinguished by a first requirement: that of favoring the varietal aromas of Tannat. If these wines from the South-West have the reputation of being traditionally mellowed by aging in barrels with an accent on their bouquet, those of the estate readily take the opposite view. Controlled macerations, gentle extractions, make Aydie the Origin and Odé d'Aydie cuvées where the elegance and expressive power of the fruit take center stage. While with Aydie Castle which stems in contrast to the local tradition, it is all the typicality of a Madiran which emerges after a long aging in barrels and wooden vats. Sharing the Madiran terroir, the Pacherenc-du-Vic-Bilh also shine with their presence. Honoring the Gros and Petit Mansengs, dry or soft, they are full proof that these whites from the South-West develop exceptional aromatic powers and elegant structure. Outside the appellation, there are two pretty rosés, named Aramis et The three little pink pigs. And to end on a family secret, we breed at will at Laplace a superb liqueur wine, the Maydie, gorgeous vintage from a Tannat harvested at full maturity.

The Madiran vineyard draws its specificity
from a native grape variety of the Pyrenean foothills: Tannat