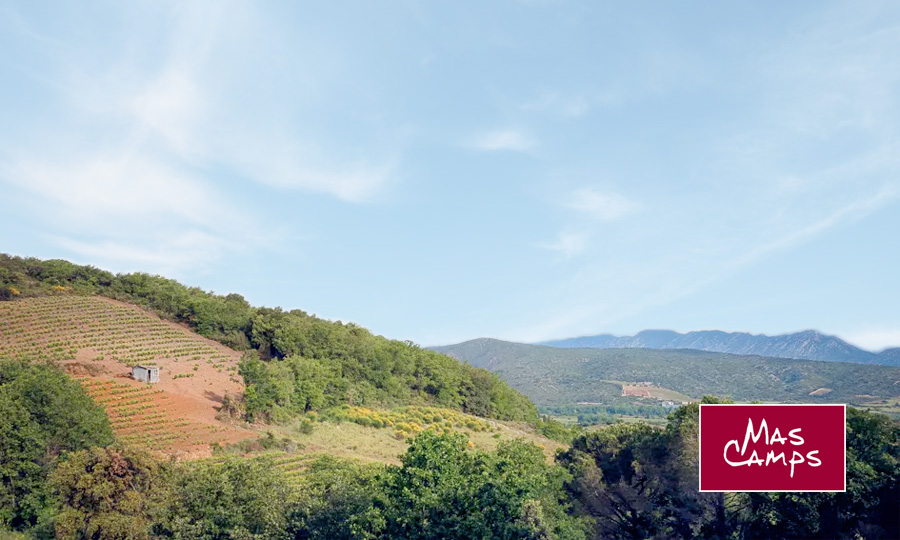 On the Maury cru, Mas Camps first and foremost as a distinctive mark. It is indeed under this name claimed as a signature of its know-how thatOlivier Castells produces its wines.

A man and a domain

Mas Camps is a name that opens first on a meeting: that ofOlivier Castells. Here, the estate is inseparable from the man who breathes his soul into it. This is the case in Occitania vineyards : some winegrowers are endowed with a charisma which is also the tool from which they forge their wines. Because Mas Camps is located in the heart of a Roussillon cru with an assertive character: that of Maury. Renowned for its natural sweet wines, the appellation also gives substance to dry wines mainly made from Grenaches. The estate is established there at the confluence of two rivers: Agly and Maury, from which the land takes its name. At this point where the valley narrows, the landscape is imposing in nature. From this strategic bottleneck already known to the Romans, the vines stretch out to the horizon of Corbieres. High limestone reliefs draw the far limit. On these ridges of a luminous gray dominates the Quéribus castle.

Some red and some white

On this historic terroir which calls for respect for ancestral soil, Olivier Castells leads his vineyard under the certification High Environmental Value (French Environmental Label). This wine heritage developed over three generations includes 30 hectares of vines to which are contiguous 5 hectares of fallow land and moors. Formerly intended for the cooperative, the fruit of the harvest is now entirely vinified at the estate. AT Mas Camps, the grape variety reconciles white and red. The former see Maccabeu, Grenache blanc and gris, Muscats d'Alexandrie and à Petits Grains as well as Sauvignon in the plain. The reds are born from the alliance of Grenache, Syrah, Mourvèdre and Carignan. Young Cinsault people destined to introduce new expressions recently joined the family. The harvest, done by hand and then placed in vats by gravity, guarantees the irreproachable quality of the wines of Mas Camps.

For a winemaker who creates wines, the plot selections and the expressive potential of each harvest take precedence. AT Mas Camps, the vinifications and the maturing thus come under scores written to measure according to the potential dictated by each vintage. The wines have the typicality of the Catalan lands and the terroir of Maury. This is the case with Red bottle produced in Coasts of Roussillon Villages. Resulting from integral vinification where the dominant Mourvèdre is matched with Grenache, this cuvée consolidates its structure over 12 months of barrel aging. On a profile focused on the fruit, At the foot of the Roc finds its freshness in the blend of Mourvèdre, Carignan, Grenache and Syrah. It is offered in contrast with The Round of the Winds, solar cuvée where Grenache and Syrah reconcile maturity, complexity and roundness served by 15 months of aging. In another typicality, specific to Côtes Catalanes wines, a Carignan of pure expression. White wines are not left out in the vineyard of Mas Camps. Pearl Dawn, vinified in accordance with the singularity of each vintage, enhances a plot of old vines where Muscat and Maccabeu coexist. Vial, in white version, comes to seek the finest potential of white and gray Grenaches whose fine complexities match a 6-month aging in 500-liter barrels.

What about Maury's natural sweet wines?

Si Mas Camps stands out for its dry wines, the estate is also part of the historical continuity of the terroir of Maury, recognized since 1936 for its natural sweet wines. Olivier Castells perpetuates the aging of elegant traditional cuvées: Maury white, Maury red, but also a Muscat de Rivesaltes while seeking a balance of sugars and alcohols. 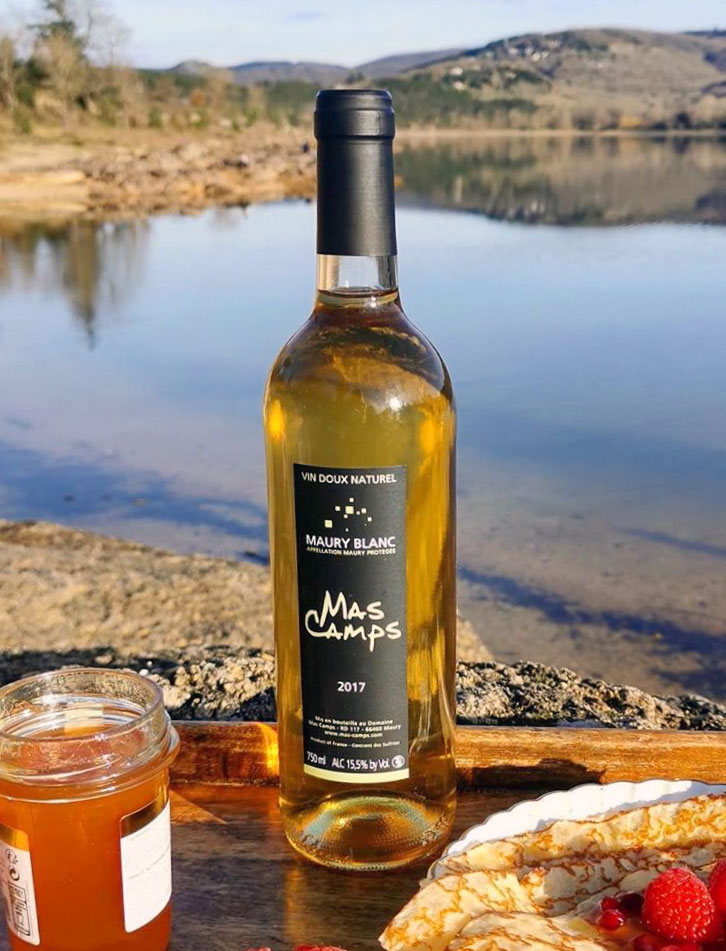 Known for its natural sweet wines from Roussillon but also for its red wines, Maury is both one of the oldest wine appellations in Roussillon and the smallest.