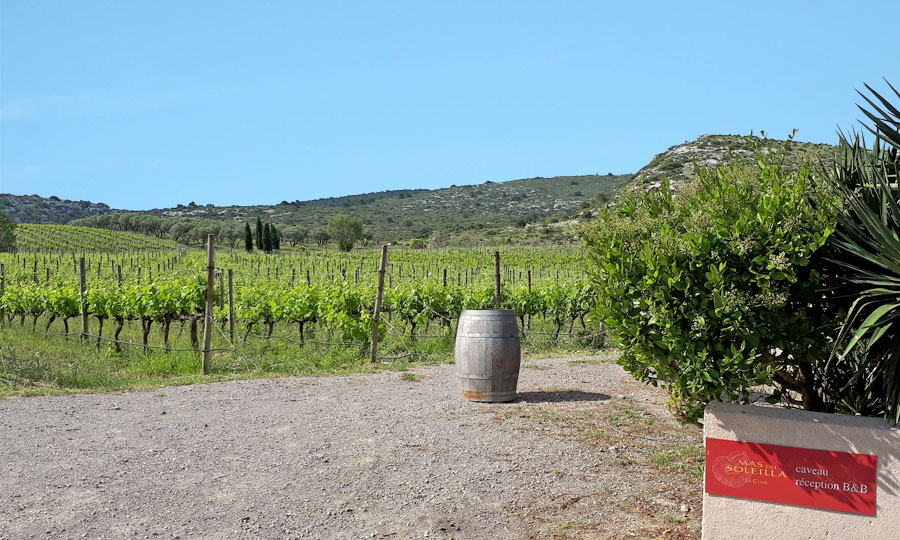 The following article predates fall 2018. Since that date, the Mas du Soleilla has changed owners. Acquired by the vineyards Gérard Bertrand, it is now attached to the wine and wine tourism complex of Chateau l'Hospitalet.

Certified organic since 2012, the Mas du Soleilla is an exemplary domain of remarkable wines that the La Clape vineyard is capable of generating.

The signature of the terroir

Originally from Switzerland, it was in 1998 that peter wildbolz et Christa derungs are established on the La Clape massif. Taking charge of the fate of Mas du Soleilla, they make the judicious choice to start an organic conversion early. Initially acquired with 7 hectares of vines, the estate now has 22 hectares. On this geological site which was first an island in ancient times, the vineyard thrives today on a limestone plateau. Located at an altitude of 130m above the level of the adjoining sea, it is not uncommon for a few oyster or ammonite fossils to emerge between the rows of vines. And when peter wildbolz tells you that when you buy a domain, you also buy a story, we understand that in these places the history is also that immemorial of a land that will be a signature in the wine.

The power of fruit

Au Mas du Soleilla, the culture of the vine is carried out with a subtle rigor where the apparent modesty of the winegrower hides a particularly expert technique. This starts with a detailed knowledge of the terroir and its climatic variations. The way to grass the vineyard, only until the end of the rainy season, is a first clue. Because later, the sea wind and the calcareous soils sometimes favor droughts which make it necessary to avoid root competition for the vines. The future elegance of the fruit, the strength of its juices, the concentration of its aromas depend on it. ATu Mas du Soleilla, this is how we carefully watch over the Grenache, Syrah, Cabernet franc or Merlot intended for red wines, without forgetting Roussanne ou bourboulen to the fate of white wines. The artisanal care given to the vines is also found in the conduct of the cellar. The shape of the vats, their sizing, the control over temperatures, all combine to give the terroir and its fruits some of the most interesting wines of the appellation.

The consistency of the wines

Au Mas du Soleilla there is a rule: to make wines that stand out from each other. This bias is reflected in the visual of the labels, the subtle color ranges of which clearly distinguish each cuvée. Thus present themselves The Ammonites, in orange ocher dressing, and whose garnet color revealed in the glass already reveals the velvety presence of blackberry or cherry, Grenache fruit combined with Syrah. Follow The Chailles, dressed in a dense purple which announces in suppleness and finesse the marriage of red fruits and spices, a signature dominated by the old Grenaches of the domain and always the Syrah. With The Bartelles, introduced by a carmine red visual and whose alias is that of small garrigue woods, woody and spicy accents complicate an already very fascinating picture. Then announces the Almond tree fence, whose vermilion label is the ambassador of slow barrel aging, giving accents of truffles and mokas to the fruits already so well expressed. Contrasting with the velvety and well coated tannins of the red wines, the white wine extracted from Bourboulenc and Roussane offers floral freshness and peach accents, under a bluish label which puts the final touch. From this set emerges a great visual coherence, which reflects the complex straightforwardness of the wines of the Mas du Soleilla, all intensely and virtuously expressive of terroir of La Clape.