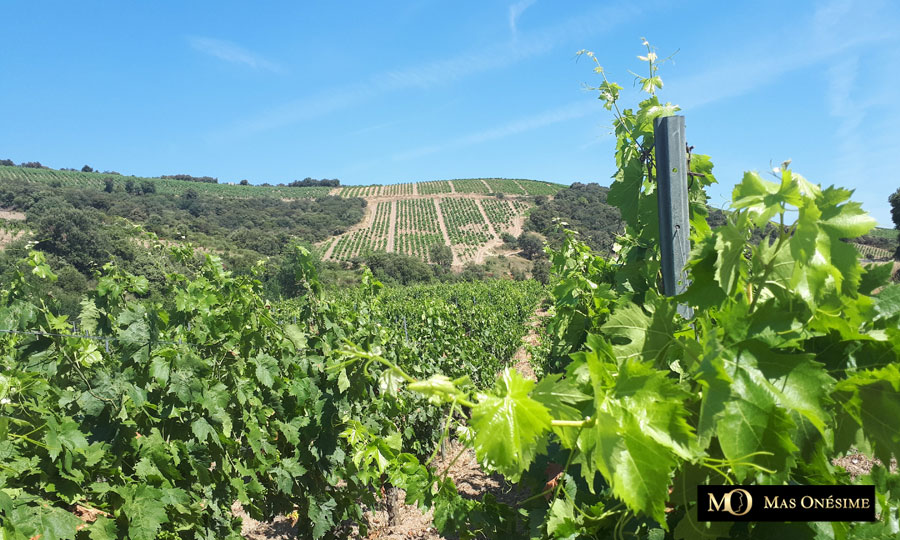 Property ofOlivier Villaneuva, Mas Onesime is located in La Liquière on the appellation Faugères. Its production is undoubtedly summed up in its motto: great wine with character.

Independence on the horizon

A meeting with Olivier Villaneuva do not forget. The charisma announces itself from the first words. This impression is always obvious: that of having as an interlocutor a winegrower committed to the passion for his terroir and the requirement to extract great wines from it. The character lends itself to this which interweaves the vitality of Spain through its paternal ancestry with the loving roots in the terroir of Faugères by maternal ancestry. The founding figure of the grandfather watches over it Onesime whose domain perpetuates memory by name. In this story of generations, it is Emmanuel, Olivier's father, who contributed to the extension of an estate which covers around one hundred hectares. Long dedicated to the cooperative, the vines returned to Olivier's hands in 1999 are gradually gaining in independence. First with ten hectares operated in independent cellar, Le Mas Onesime will soon identify about twenty driving under organic label.

The magic of shales

Faugères it is above all a land of schists whose geology sets the limits of the appellation. On this terroir leaning against the foothills of the Espinouse and Caroux massifs, the richness of the plot nuances derives as much from the variation of mineral veins as from the sudden changes in altitude. At Mas Onesime, the vines run on the hillsides which oscillate between 280 and 360m in height. The Cinsault, this Pinot noir from Languedoc, holds a unique place in it. Mainly from old vines, it rubs shoulders with Grenache and Carignan. On this vineyard facing the distant horizon of the sea, the signature is obviously Mediterranean. The voluptuously expressive character of the wines of Mas Onesime is born in the first place from this potential as distinctive as it is singular. The challenge is obviously to access the highest expressions of the terroir. The resulting requirement is summed up in meticulous stance: regulated yields, manual harvesting, gravity vat, aging concentrated on the fruit.

WhenOlivier Villaneuva describes the desired profile of wines from Mas Onesime the statement is clear: " elegant, fine and deep wines that reflect all the authenticity and minerality of the terroir. The formula is unstoppable and finds its perfect illustration in the tasting. The range of wines is declined in precision and each name is itself an ambassador of the spirit which conceived it. To start with The rebellious, whose full personality is reflected in a non-appellation white wine made from 100% Chardonnay, paired with a rosé wine and a red wine in AOP Faugeres, the first doing honor to Cinsault, the second to the alliance of Cinsault, Carignan, Grenache and Syrah. The Cinsault again, in a single varietal, red wine version and without sulphite, a real song of the fruit of which Olivier Villaneuva has the secret of an aging entirely dedicated to aromatic powers. Then The groove, which traces its profile straight out, all in freshness and complexity inherited from a dominant Grenache, nuanced by Carignan, Syrah and Mourvèdre. The Hidden Paradise finally, flagship of the domain, whose generous nose combines the spontaneity of red fruits with accents of pear and chocolate on the finish. From experience emanates not a conviction but an evidence for which the motto of the house - Mas Onesime, great wine of character - finds its most authentic testimony in the voluptuous experience of each cuvée.

Focus on the cuvée Fruit Day

With Fruit Day, Olivier Villaneuva inaugurates one of his first demonstrative cuvées of his conversion to biodynamic viticulture. A full-fruit 100% Cinsault wine from Faugères, harvested by hand on a shale terroir.