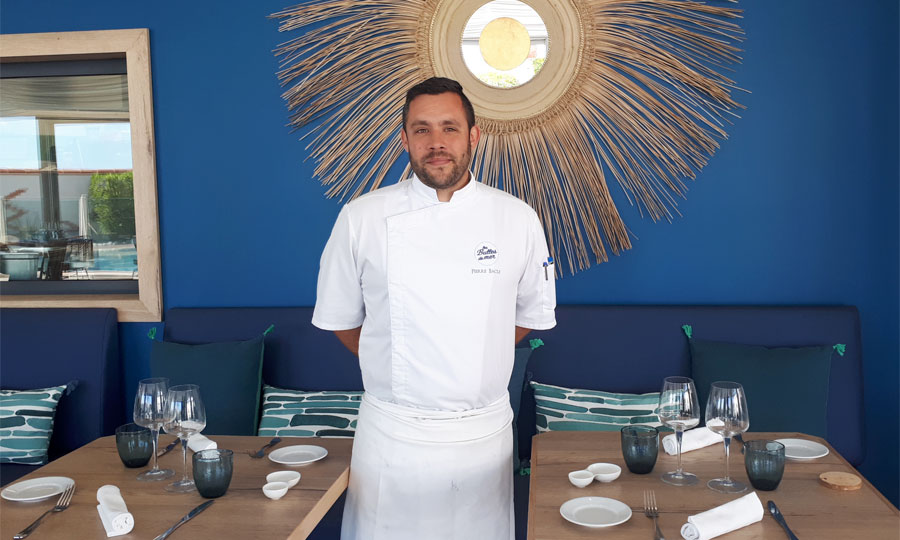 The sign of the restaurant Les Ganivelles is not located on the street but on the beach. The establishment is part of the Les Bulles de Mer hotel in Saint Cyprien. Specializing in "healthy" cuisine, its menu bears the signature of chef Pierre Bacle.

A spa hotel on the lagoon

Completely renovated in 2018 and 2019, the hotel The Bubbles of Sea offers a setting of great elegance that bears the signature of the decorator Annabelle Fesquet. Perfectly located on the edge of the beach, its restaurant is branded The Ganivelles. It inherits its name from these openwork fences made of thin wooden posts that help protect the dunes. At the heart of this spa hotel on the lagoon, he had to offer a catering in accordance with the place. It is at Pierre Bacle that the responsibility has returned with the challenge of producing "Natural cuisine, obviously Mediterranean, lively and colorful like the south, finely crafted to become obvious".

The call of the Mediterranean

Pierre Bacle built his menu there on the basis of his experience. Trained at the Hotel School in Tours, his career led him to frequent distinguished houses. After his first steps with Charles Barrier in Tours, he is then found at the Château de Beaulieu then in Saint Florent in Corsica. The Mediterranean having conquered this young chef, it is at the Mas d'Huston in Saint Cyprien that he finally lands. It only took one step for him to take responsibility for the restaurant The Ganivelles in 2018. The challenge in these places is fixed: to implement a healthy cuisine, both built on lightness and the search for textures and flavors. As short circuits are privileged just as much as preferably organic products, Roussillon is at the heart of its choices and its inspiration.

Between garden, orchard and vineyard

Roussillon is a garden and an orchard where the principle of cooking healthy imposed itself with nature. The Mediterranean signature is necessarily accompanied by olive oil from local soils, saffron, and of course fishery products. Some classics are also essential such as foie gras combined with an apple rhubarb chutney and a jelly of Maury rancio. Or the almost rosé veal from Cerdagnes, accompanied by a summer truffle sauce and its artichoke barigoule. Roussillon wines are counted on, with a semi-cooked foie gras poached in Banyuls white, a monkfish with Collioure white, a veal cooked in Corbieres, a pear poached in Rivesaltes tiled.

The page of the restaurant Les Ganivelles