On Vermilion Coast, at this meeting point where the Pyrenees plunge into the Mediterranean, Greeks and Phoenicians founded the port of Collioure. We owe to their presence the establishment of the first vineyards on the slopes which dominate the city. So Catalan terroir the southernmost part of the Occitanie region, the vines enjoy superb sunshine. They draw their sap from reliefs of brown schists cut into terraces. Locally appointed feixas, they overlook the surroundings of the three other towns of the appellation: Banyuls, Port-Vendres et Cerbère. On the sometimes steep slopes where manual viticulture is practiced, Mediterranean grape varieties typical of the appellation reign. Frequently cohabiting on the same plot, there are Grenache noir, Syrah, Mourvèdre in dominant parts, but also Carignan, Cinsault or Grenaches gris and white. The Collioure wines are produced in red wine, rosé wine and white wine. On the same terroir, the natural sweet wines of Banyuls and Banyuls Grand Cru. Full of sun, they give pride of place to Grenache Noir, which aging and controlled aging pushes to the fullness of its aromas.

Where to find Collioure wines?

A wide range of wines from Collioure, Banyuls and Banyuls Grand Cru in Argelès-sur-Mer.

Wines from Collioure and Banyuls worked in the purest expression of the terroir.

Domains and winegrowers of Collioure

Terres des Templiers perpetuates the know-how of Catalan viticulture for which the wines of Collioure, Banyuls and ...
Read more… 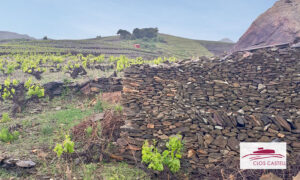 Between cellar and garden, from Mas Guillaume to the terraced vineyards that surround it, Clos Castell offers a site and ...
Read more… 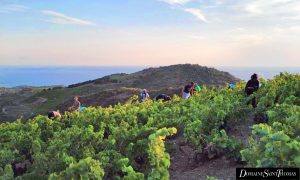 Getting to know Collioure wines better

Summaries of the specificationsPDO Collioure

Geography of the Collioure vineyards

Clinging to the slopes of the Pyrénées Orientales, the Collioure vineyard is the southernmost in France. He runs between tue i mount, that is to say between "sea and mountain" in Catalan. Suddenly declining from the 917 meters of the Pic de Sailfort to level 0 by the sea, it is spectacular with its very steep slopes. Four port communities occupy the maritime fringes of this vineyard of the " Cote Vermeille »: Cerbère, Banyuls-sur-Mer, Port-Vente, Collioure.

The natural limits ofPDO Collioure are identical to those ofPDO Banyuls with which it merges:

The uprising of the Pyrenean chain created a very tormented landscape. Small amphitheatres alternate with belvederes overlooking the sea. The geological foundations contribute to the coherence of identity: the Collioure vineyard takes root in brown shales with low water retention capacity. Grown in named terraces feixas, the plots of vines rise to an altitude of 400 meters. Descending in steps from the heights to the valleys, they occupy at the bottom of the filtering and stony alluvial bands fed by the rivers which drain the wine-growing area.

Like the whole Roussillon,PDO Collioure enjoys a high annual sunshine rate. It bathes in a mild Mediterranean climate in winter, hot and dry in summer. The average temperature, established at around 15 ° C, is to be modulated according to the altitude. Although the thermal average seems moderate, the vine is subject to significant thermal variations on a daily basis.

The altitude interferes just as much with the rainfall which is characterized by an irregular and often violent rain regime. Long periods of summer drought alternate with paroxysmal showers in spring and fall. Erosion and gullying of the soil are precisely at the origin of the development of terraced vines. Another climatic feature is the frequency of winds:

In this climate of strong contrasts, the vines make up most of a landscape where they rub shoulders with meager wooded areas of cork and holm oaks, olive trees, Mediterranean shrubs and moors.

History of the Collioure vineyard

On Cote Vermeille, the culture of the vine goes back to the first Phoenician counters which set up in the port of Collioure around the VIIe century BC. The geological morphology and climatic riders of the region very early on imposed cultivation on terraces. Well established at the beginning of the Middle Ages, the development of the vineyard was consolidated under the territorial administration of the Templars. On these steep slopes, the strong runoff of water imposed a unique system of canalization. Throughout the Collioure vineyard radiates a network of named channels knees. Carved out of the schist soils, the plates of which are then ordered to form the architecture, they mark each parcel with fan-shaped furrows. This composition of converging canals which recalls the shape of a rooster's foot is called little gall in Catalan.

Port cities contribute to the flourishing trade of Collioure wines. From the XNUMXthe century, the wine-growing activity is supported by Jacques 1er of Mallorca, then by the kings of Aragon, who retrocede to the municipalities a tax levied on imported wines. The high quality of local production is thereby supported. At that time, dry wine is appreciated either naturally sweet, or " fortified »By adding alcohol. With a high alcohol content, it is suitable for " travel »And enjoys a great notoriety in the neighboring courts of Aragon, Castile, or Mallorca. The reputation of Collioure wines later extended to the northern countries to which they were transported by sea via the Strait of Gibraltar.

In 1659 the Treaty of the Pyrenees annexed the Roussillon to France. The smuggling economy grows to thwart the introduction of taxes. The State threatening to intervene, the Intendant of the Province of Roussillon establishes a compromise. This grants bonuses for planting vines in order to encourage smugglers to become winegrowers. The establishment of the practice of " lease in complant "Or" dead stump »In force in Collioure vineyard since medieval times stimulates the cultivation of the vine. This method of exploitation confers ownership of the vines to a winegrower who does not own the soil. Under this regime, the landowner sells his plot in co-ownership, with as a counterpart the obligation to keep each vine stock alive. Over time, regular replacement of dead feet leads to complant several grape varieties on the same terrace.

From the XVIIIe century, trade intensified around the port of Port-Vendres. The railway reaches as far as Collioure before joining up with Spain. The population grows in proportion to the boom in port activity. The practice of " lease in complant »Popularizes access to a piece of vines. The Collioure wine takes its commercial development under the impulse of the traders. In this commercial context, Father Rous developed a small business of mass wine which contributed to the restoration of the church of Banyuls.

The year 1885 marks the late phylloxera crisis. The disease wipes out much of the Collioure vineyard. However, the Arago law of 1872 supplemented by the Pams law of 1898 confers a particular tax status on naturally sweet wines. The vineyard then specializes in the production of natural sweet wines which eludes the reputation acquired for dry wines. From 1936, thecontrolled designation of origin "Banyuls »Is granted for natural sweet wines. The Collioure wines are then marketed in " natural wines from the Banyuls region Until 1960.

The classification in PDO is acquired in 1971 for the red Collioure wine before the recognition of the rosé Collioure wine in 1991 then that of the white Collioure wine in 2003. Since then, the same terroir has been superimposed onPDO Collioure andPDO Banyuls. The red wines draw from the dominant Grenaches a sustained color, a dense nose where spices and ripe fruit are supported. Their richness is consolidated by a tannic structure favorable to aging. Rosé wines develop a fruity bouquet with bursts of freshness. The white wines are articulated around aromas of flowers and honey from which emerges a slight tannic note.