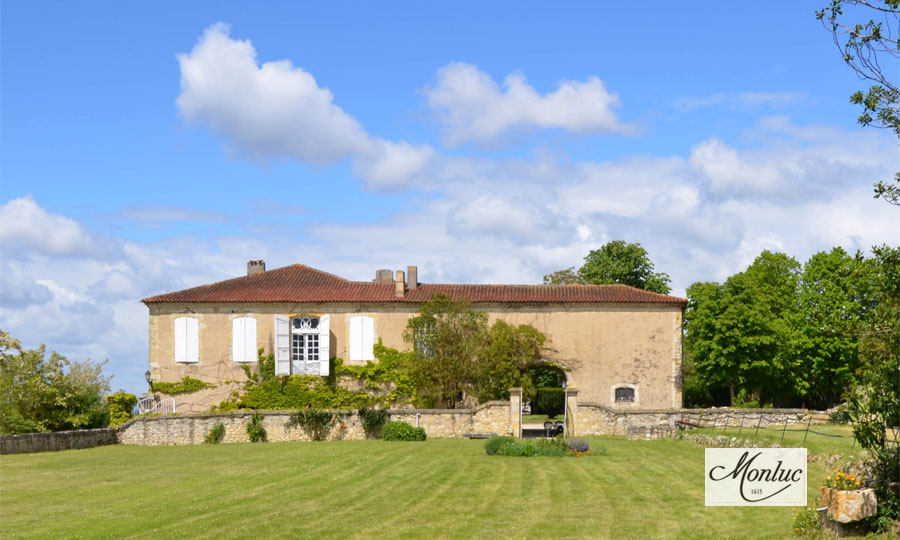 Heritage site of wine tourism interest, the Chateau Monluc is distinguished by its sparkling wines from Gascony, its still wines, its vintage Armagnacs and its famous Pousse Rapière.

From Monluc to Pousse Rapière

At the highest point of the village of Saint-Puy, on the foundations of a XNUMXth century strongholde century, rises the Chateau Monluc. Home of Blaise de Monluc, man of letters and notorious Renaissance knight, the place commemorates the ever-living memory with its name. Well established on its history, the site has reinforced its contemporary notoriety by the exploitation of its 65 hectare vineyard, today in organic conversion. As is the tradition in Gascony, this was used in the first place to makeArmagnac. On this terroir favorable to the cultivation of white grape varieties, wine production then extended to the production of still wines mainly linked to theIGP Côtes de Gascogne. The cohabitation of spirits and wines in the cellars of Chateau Monluc was decisive of its identity. It is distinguished in particular by the invention of the most famous Gascon aperitif: the Rapier shoot.

The master builder of the wine reputation of Chateau Monluc is Rene Lassus who watched over the estate until 2009. Tireless winemaker, pragmatic and creative, he endows the operation of a cellar inspired by Champagne houses. Its effervescent character, it transmits to the wines. Not content to match his productions with a sparkle that distinguishes them, he pushes the invention a little further by creating a Armagnac liqueur. From the noble marriage uniting bubbles to this elegant spirit with accents of orange zest was born the Rapier shoot. The typical Gascon aperitif commemorates the spirited knight Blaise de Monluc with its name. He was indeed a great expert in the handling of these long swords called rapiers and of which the museum space attached to the vault presents two fine examples. Because the Monluc castle is above all a place of wine tourism interest which reconciles heritage discovery with the opportunity of an original tasting.

From bubbles to wines and spirits

The Champagne method imported into Gascony is one of the distinctive features of the wine showcase of Chateau Monluc. The first effervescent is of course the one that contributes to the composition of the Rapier shoot and who is called Wild Wine. He meets in the same family a Monluc Brut Rosé which draws color and bouquet from the blend of Merlot and Cabernets, as well as a Raw Chardonnay whose sparkle is tied to evocations of peach and white flowers. Do not forget in the range of sparkling wines a Tile famous which has loyal followers. The still wines of the Côtes de Gascogne are also on the agenda. They are united by the range Goupil Deals Available in dry white, soft white, red and rosé. A self-respecting Gascony estate announces its Armagnacs without fail. AT Chateau Monluc they come in vintages, just like at Armagnac Jean Cave which belongs to the same house.