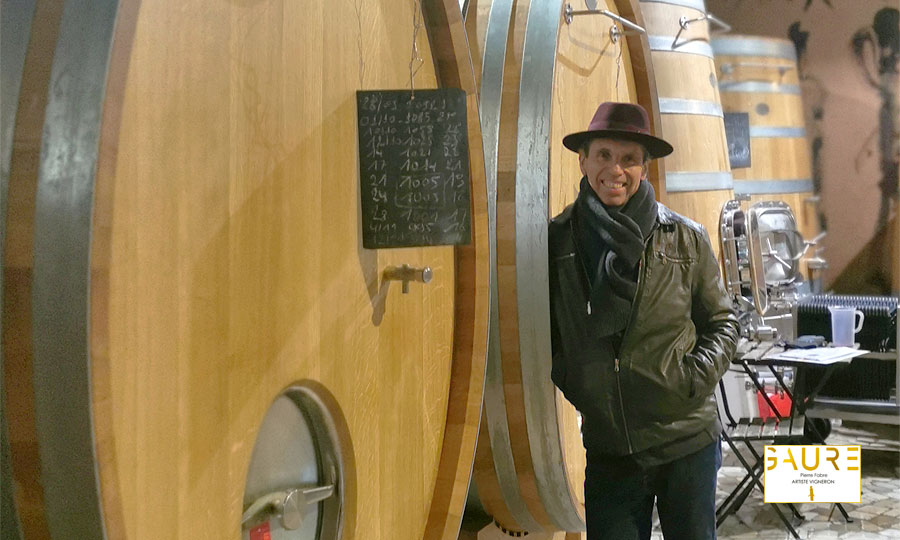 In Rouffiac d'Aude, in the heart of a vineyard located between 200 and 450 m above sea level, the Gaure Castle. Pierre Fabre, a winegrower with artistic talents and master of the place, designs organic wines produced in AOP Limoux and AOP Languedoc.

Pierre Fabre is the son and grandson of winegrowers. Better yet, he inherited his winegrowing spirit from the five generations that preceded him. The detour as an industry leader that this engineer from Arts & Métiers first made did not extinguish the appeal of the vineyards. The pivotal year of the return to the land is 2005. It is marked by an exceptional blow of heart for the Gaure Castle located in Rouffiac on thePDO Limoux. Pierre Fabre then turns the page of his life as an industrial director to reconnect with the life of a full-time winegrower. The place is magical where previously sat a Roman villa and which was occupied in the twelfthe century by the Templar Arnaud de Gaure. The winemaker's determination to revive this historic estate is therefore based on an approach of excellence based on a global organic conversion. A natural decision for a winegrower whose family history is steeped in the know-how specific to viticulture and which the organic way restores in its purest tradition.

When you are the heir to a dynasty of winegrowers, you have an understanding of the land and the vineyard. In Pierre Fabre it is manifested by the fine desire to consolidate the productions of Gaure Castle on two specific terroirs: Limoux in Languedoc for the whites, Latour-de-France in Roussillon for the reds. This choice endows the estate with a great wealth of grape varieties. If in Limouxin the Chardonnays are kings, the old Carignans, the Grenaches, the Mourvèdres, the Syrahs and the Macabeus reign over the vineyards located in Catalan soil. On these soils where schist and limestone coexist, the yields are particularly moderate and qualitative. Excellence is reinforced at harvest time by manual harvesting and sorting on the plot. The transport to the cellar is done in openwork boxes which preserve the integrity of the berries. The vinifications are meticulous and forge their authenticity on the virtues of indigenous yeasts. The ensuing farms benefit from top-of-the-range equipment where the Stockinger tuns coexist with the Nomblot concrete tanks.

Le Gaure Castle produces 6 cuvées: two in single-grape varieties, pure expression of the fruit and its terroir, supplemented by four other blends that enhance the typicality of the plots and the harmony of the grape varieties. In perfect symmetry which also translates a desire for balance, the collection is distributed in three white wines et three red wines. The first are vinified in AOC Limoux and the latter in AOC Languedoc. As it should in the land of Limoux, Chardonnay is the mainstay of all white wines. First expressed at 100% with the cuvée White countryside. Then engaging in increasing complexities with Chateau Limoux made from 85% chardonnay and 15% Chenin or even Oppidum Available in 75% Chardonnay, 15% Chenin, 5% Mauzac. On the red side, the pure expression of the fruit is introduced by Red campaign, a 100% Syrah. Then emerges the art of nuance and assembly with in the first place Languedoc castle, where the dominant Grenache is nuanced by Syrah, Carignan, and secondly the emblematic For my father, an art of composition where balance is played out in 40% Carignan, 20% Syrah, 20% Mourvedre and 20% Grenache.

If the wines of Pierre Fabre each reveal themselves as a creation, they are also served by authentic labels of which the winemaker himself is the author. Because man devotes himself as much to viticulture as to painting with equal talent. At Gaure Castle the old Orangery and the Chapel are the places where the work is developed. One as a workshop, the other as an ornate decoration. If there is a beautiful personality to meet, whether it is the man or his wines, it is always Pierre Fabre it is about.