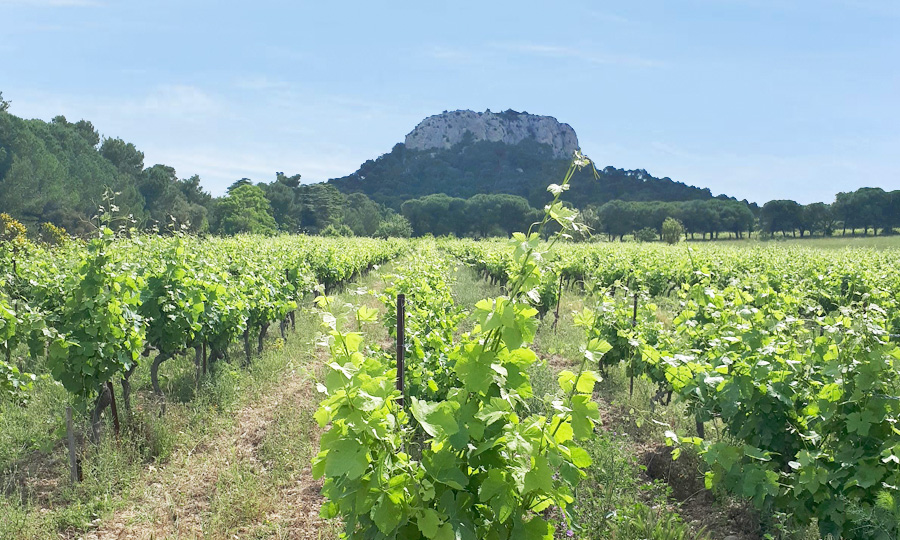 On the La Clape vineyard there is a name that stands out in the foreground: Chateau Pech Redon. Borrowing its title from one of the most picturesque sites in the massif, the estate is exemplary of the Mediterranean characteristics which distinguish the wines of the appellation. It is also one of the most respectful of the protected natural park which makes its environment.

The Romans called it Rotundum Podium. They had established a villa in these places blessed by the gods. In the massif of La Clape, this unique and singular relief named today Pech Redon seems to have frozen in the magic of time. At its feet, nature is beautiful and the vines unfold there, lively and branched out in goblets. The biodiversity that reigns there is probably very close to that of antiquity. Thyme, rosemary, cysts and all the plants of the scrubland thrive here. Familiar with the vineyard, they permeate the spirit of the wine. When in 1988 Christophe Bousquet settled on the vineyard of Pech Redon, his first decision was to make this unique place the first organic domain in the La Clape massif. This determined choice, respectful of the native flora and fauna, gives the vines a vitality and a potential for expression which have made Chateau Pech Redon one of the most qualitative areas of the appellation.

The wines of Pech Redon have character: that of the place as well as that of the winegrower. The care given to the vines combined with the power of the terroir and the climate are the first ingredients of success. The requirement and pragmatism that go through the care that Christophe Bousquet brings to the vineyard, to winemaking and then to aging do the rest. The Languedoc goblet pruning offers the first virtue of regulating the effects of a pure Mediterranean climate. The harvest is carried out by hand and in crates in order to preserve the grapes and limit as much as possible the time between pruning and pressing. The vinification adopts protocols regulated on the perfect knowledge of the soil and the indigenous yeasts. The aging applies to nuances which reveal a skilful mix of creation and know-how. Because the wines of Pech Redon respond to a right determination: to make wines that are the most evocative translation possible of this remarkable site.

In the wines of Chateau Pech Redon In the first place, a mineral tension dominates where the powers of the fruit combine with the essences of garrigue and coniferous trees. Once grasped, this conductive axis unfolds in nuances testifying to great technical finesse. The range of red wines is clear and precise. The Cades, whose name borrows from that of a Mediterranean shrub, brings together a trio of Syrah, Grenache and Cinsault, carefully extracted during three weeks of maceration. The Hawk, star of the estate, is dominated by a Syrah with enhanced virtues in lightning, associated with a Grenache that the holding in vat sets on the fruit. The Centaury, from a Mourvèdre vinified with Syrah, pushes the aging logic even further to reveal its black fruits, warm spices and garrigue breaths after maturing for 30 months in 500-liter barrels. With The Genêts, Chardonnay and Viognier come together in collusion for a very nice surprise: that of a Mediterranean sailing wine. Under its golden yellow color tinged with freshness, it reveals a complex aromatic fabric where citrus peel weaves its way through dried flowers, candied fruits and memories of nuts or truffles. That they are developed in strict La Clape appellation or more broadly Languedoc, the wines of Pech Redon are obvious: that of being the full expression of a remarkable terroir, valued with integrity and virtuosity by Christophe Bousquet.