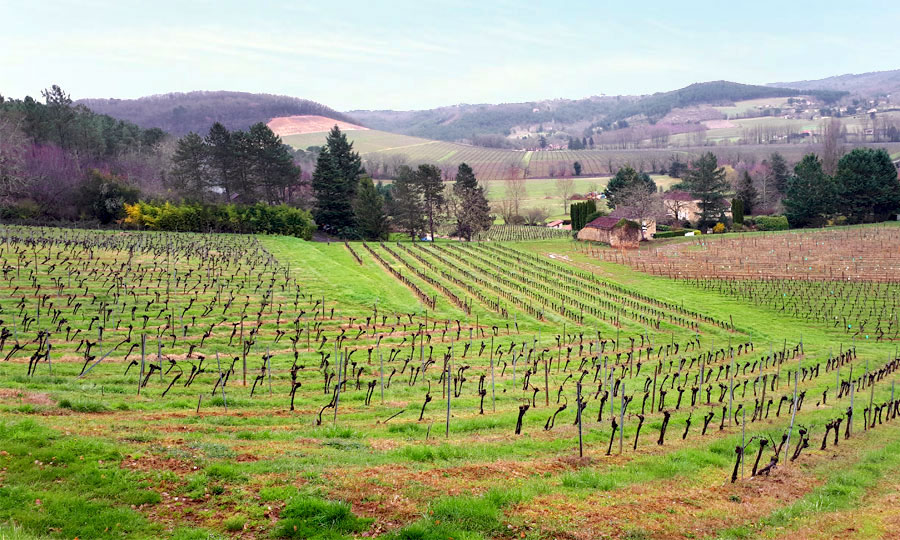 Established for several generations in the AOP Cahors terroir, Didier Pelvillain is the conductor of Vignobles Pelvillain. It produces on three different terroirs demonstrative wines of all the resources of the Cahors wine and the Malbec grape that characterizes it.

The history of Vignobles Pelvillain is above all part of a family epic. The oldest records trace the use of land to five previous generations. The real wine revolution took place in the 2013s. This period marks the construction of the first cellar. It imposed itself with the development of the vineyard, which first established itself on the Château de Cénac then on the Château du Port. In 52, the Domaine du Théron was added to this initial potential. Today, Vignobles Pelvillain has XNUMX hectares of vines, divided into around sixty plots. The whole meshes a territory twenty kilometers long and ten wide, between Luzech and Puy-l'Évêque.

The uniqueness of Vignobles Pelvillain is based on the resources offered by these three terroirs. Their division foreshadows varied specificities on an appellation where the Malbec grape variety is largely dominant. Because Cahors wine is first and foremost Malbec, to which the mosaic of Lot lands, structured between terraces and hillsides, gives a whole range of expressive variations. This is the case with the Vignobles Pelvillain where each of the three estates brings a singularity inscribed in the wine. the Cenac Castle occupies a plateau of brown clay and white or red sand, surmounted by ridges of limestone rocks. the Port Castle, established on the third terrace, is distinguished by its red clays and pebbles. As to Domaine Theron, it reveals cooler lands, made of ocher sands and ferruginous stones intersected by discrete sheets of clay.

Didier Pelvillain is the prime contractor for winemaking. His personality infuses his wines with controlled qualities, demonstrating the potential of the three vineyards. Those of the Domaine du Théron are essential on two scales. With the cuvée Exposure, the choice of a vinification without sulfite delivers a Malbec full of crunch and a sincerity without veil. The fruit is preserved there in all power, well off from its original aromas reminiscent of blackcurrant and liquorice. With the Great Reserve from the same domain, Malbec becomes more complex. It will seek out the well-balanced tensions of a woody note which gives the ripe fruit an elegant toasted effect. Under the label Port Castle, we will find a Cahors wine more centered on the tradition of the appellation. The more insistent tannins on this terroir call for more sustained barrel aging. Amplitude, elegance and finesse then converge. The Château de Cénac is the cradle of the cuvée Eulalie. It is the top of the range of Vignobles Pelvillain, characterized by a wine with woody accents, just as voluminous as it is coated with sweetness. All these wines are also characterized by a singular minerality. Also present in the whites, it is the charm and the persistence on the finish of the cuvées Inspiration, made from Chardonnay or Gros Manseng.

The Cahors vineyard draws its specificity
of a native grape variety from the South-West: Malbec, more commonly called Côt in the appellation.