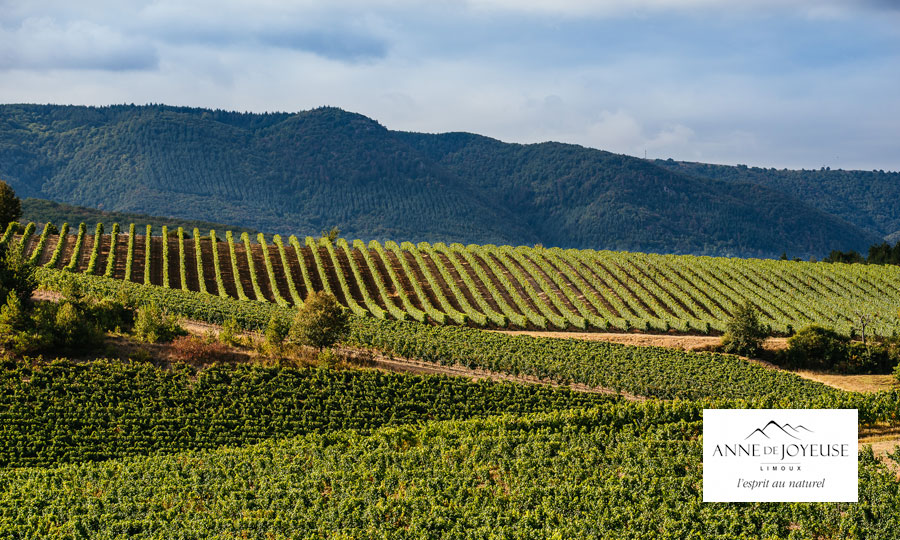 If the Limoux appellation is renowned for its sparkling wines, the terroir is also very favorable to still wines. The proof is provided by Anne de Joyeuse whose cooperative production is entirely dedicated to red, white and rosé wines.

Where history makes the name

Limoux is a land steeped in history more precisely marked by some celebrities of the XVIe century. Cooperative Anne de Joyeuse borrows its name from one of these notorious characters: the Duke of Joyeuse to which King Henri III offered the seigneury of Limoux. We are therefore here in a land of tradition where viticulture has been established for a long time. The terroir is indeed favorable to the vine. This one runs on the slopes of the Pyrenean foothills. Although established in Languedoc, a region largely dominated by Mediterranean influences, the terroir of Limoux is distinguished by a set of microclimates that give wines a unique freshness, captured just as well by reds as whites and rosés. Four wine partitions stand out, distributed between zones Autan, Mediterranean sea, Atlantic et Upper valley. These offer as many expressive modes which come to chisel the signed wines Anne de Joyeuse.

The choice of still wines

In 1868, in his Study of the vineyards of France, Dr. Jules Guyot specified that: “It is through its red wines that Limoux figures and must legitimately figure among the vintages with good wines. The tone was thus set to qualify this terroir of the Pyrenean foothills very close to Carcassonne. Subject to the convergence of the Atlantic and Mediterranean climates, the appellation is favorable to the cohabitation of grape varieties adapted to both influences. In Anne de Joyeuse it is the Atlantic strains which were favored for the reds during the reorganization of 1972. The vineyard thus honored the Merlot, Malbec, Cabernets Franc and Sauvignon which forge the typicity of the current vintages. But Limoux is also a great land of whites to whom Anne de Joyeuse did honor with Chardonnay, Sauvignon and Mauzac. Bringing together more than three hundred winegrowers on an area of ​​2700 hectares, the cooperative brings together a demanding environmental approach. To tailor the process to her measure, she created her own label Protect Planet® whose charter aims to favor the production of wines with a true and authentic taste.

At Anne de Joyeuse, the art of winemaking and aging focus entirely on still wines. Unique and original approach on this land often known for its sparkling wines. Available in several ranges, some come to take center stage. So it is with Land of the Dinosaurs which speaks of the geological richness of the soils and demonstrates it in two whites, one from Mauzac, the other from Chardonnay, as well as a red made from Pinot noir found here an exceptional terroir in Languedoc. A compelling environmental approach, organic is essential with the range Loriu - small river in Occitan - where the three colors are counted: a rosé of Syrah, Merlot and Cabernet franc; a red made from Merlot and Cabernet sauvignon; and a Sauvignon and Chardonnay white. Among the summer rosés stands out an original edition named French Parade, whose elegant dress stands out as much for the color as for the finesse of the bottle. The ambassadors ofPDO Limoux can be found in the range The Butiniere which first celebrates the environmental attention given to bees. A powerful and supple red that combines Merlot, Cabernet Sauvignon, Syrah and Malbec can be tasted there. Accompanied by a white demonstrating the subtle aromatic and structural complexities of Chardonnays de Limoux. By the way, the Malepère Garden reminds on notes of Merlot and Cabernet sauvignon that this small appellation of Languedoc is represented at Anne de Joyeuse, just as much as theIGP City of Carcassonne with the red and rosé of the D118.