Before being the names of great domains, Chateau Bouscassé et Chateau Montus are the work of one man: Alain Brumont. Certainly one of the most creative winegrowers in Occitanie, Alain Brumont is also the ambassador of a very great wine to which he has conferred all its nobility: the Madiran.

The lesson of the great oaks

Understand the Madiran supposes to know its soil. First of all its oak forests which cover a landscape of hills located in the foothills of the Pyrenees. At this crossroads where Occitania meets New Aquitaine, the ocean itself is not very far and cradles the tall branches of the trees with its winds. It is at this school thatAlain Brumont was formed: an attentive student of his native land when he was a child, he learned all the lessons for a lifetime. He learned from the great oaks that nature is autonomous, that the soil is nourished by natural cycles where flora and fauna work together. The climate, the humus of the soil, the natural environment of the land, the composition of the earth inherited from geological work: everything converged to understand that the Madiran would be a land of great wines. All that was needed was to apply the lesson learned from the great oaks to the vine.

The story begins in the heart of the birthplace where now sits this first temple of Madiran what is the Chateau Bouscassé. You had to be a man of conviction, strong in the message learned from the masters of nature, to open such a project. Because it was necessary to dig the ground, to resort to the architect to create the first cellar where the best ripened in their oak cradles. Madiran wines. Human conviction, righteousness and sincerity made everything possible. And the magic worked through the virtues of an exceptional local grape variety: the Tannat. Formerly this grape gave a wine of astringent character intended for local consumption and to enrich Bordeaux wines. IntelligenceAlain Brumont was to tame this grape variety with strong temperament by the fine knowledge of its soil and the watchmaking mastery of its wine making. The success was immediate: his first Tannat immediately conquered the planet of wines. Since then, success has never wavered: at the renowned wine school Alain Brumont has always played in the court of great creators.

In 1982 : Alain Brumont acquired the Chateau Montus, monument left in the state of abandonment. His in-depth knowledge of the local terroir allowed him to anticipate the potential for the domain to revive. Because with the castle he acquired the highest vines of Madiran, including the exceptional plot of The Tire. Stone after stone Chateau Montus was restored to become today the prestigious brand of signed wines Alain Brumont. Protected by oak forests, in a silence equal to that of cathedrals, the greatest Madiran ripen there. In this almost confidential place, the wines of Montus, as well as the prestigious The Tire or the very rare XL. In the peaceful atmosphere of the cellars where the aromas of the winemaking are already a sublimation, two simple slogans affixed on panels summarize the magic of Alain Brumont wines: " Red speaks to you "," White speaks to you ". Because the great winegrower of Madiran is above all a man of his word who knew how to keep his promise: that of making people speak Madiran one of the biggest Occitanie wines. 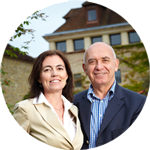 With every great creator there is often a woman. Alongside Alain Brumont it is Laurence Brumont, his wife, who is at work. She now takes care of the administration of the domains and takes care of communication. Alain Brumont wines are first and foremost a philosophy she will tell you. It is enough to be invited to the table of the couple to seize all the significance of it. In the dining room of Chateau Bouscassé all employees are there at every meal. It shares local products of which the Brumont spouses are fervent ambassadors: black pork from Bigorre, black hen from Gascony, lamb from Barèges, caviar from Riscle are all gastronomic pearls that sublimate the Madiran high on all areas of the couple. Because the Alain Brumont vintages are now added to those of Château Segondine, which Laurence Brumont received as a gift from Alain Brumont. She takes a full part in the definition of new wines, inspired by this new terroir which combines tannat et cabernet franc.