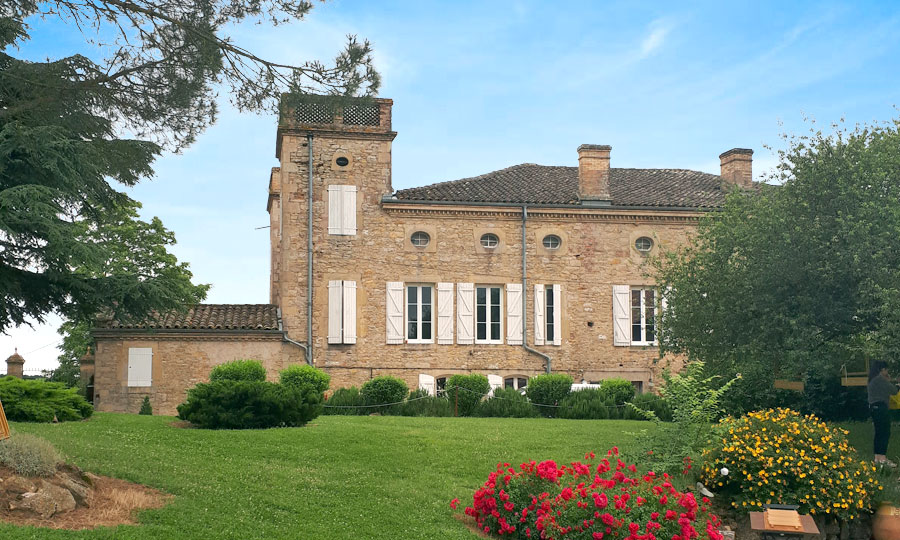 In the Gaillac vineyard, Terride Castle is a lovely place. Located near the Grésigne forest, this elegant and sober residence is run by a family of winegrowers from father to daughter. Alix david and her husband Roman lead their destiny in a framework that reflects their perfect harmony.

At the edge of the woods

Le Terride Castle could not have existed without its natural cradle: the Grésigne forest. Because it is in the heart of the woods that the story begins. First with a hunting lodge which became a residence of glass gentlemen in the XNUMXth centurye century. At that time, the presence of large oaks, siliceous soils and ferns had allowed a glass economy to establish there. The vine existed only as a domestic supplement. The Revolution, meanwhile, did its work and the Terride Castle survived as a castle of the Sleeping Beauty. The wine awakening came in the 60s when a new owner descended from Alsace began to clear the forest edges to develop vines. The first Merlots thus occupied the land conquered in the woods. They are still today among the oldest grape varieties of the Domaine.

In 1996, the David family acquired the Terride Castle. Alix, the girl, falls in love with the still uninhabitable house and begins restoration work. Because for this family from a line of Gaillac winegrowersIt was obvious that an estate would prosper here. Gaining some land in the forest, the vineyard is enriched with new grape varieties. From now on, Syrah, Braucol et Duras for the reds, Mauzac et Far from the eye for the whites, they thrive on 35 hectares. Not to mention Alix's taste for southern wines which pushed her to acclimatize Grenache et Viognier. Since 2015 she has held the reins of the family estate alongside Roman became her husband. Concerned about sustainable and qualitative development, they both lead the destiny of Terride Castle according to standards and label requirements High environmental quality.

Au Terride Castle, the wines bear the signature ofAlix. The result is a typical range of Gaillac wines, imbued with family know-how, but delivering a feminine touch full of character. In the tradition we will count the Cuvée du Château, a selection of old vines where Syrah combines with Duras and Braucol. This cuvée illustrates Alix's stance: the discretion of the woodiness which sets the expression of fruits and spices in the foreground. With Your Hand on my Way The love story comes into play: a duo work for which Romain wished to invite a Braucol entirely vinified then aged in barrels. A red wine from Gaillac all in romanticism! Then comes the titillating waltz of sparkling wines, with theMoment Terride, a pure Mauzac produced according to the ancestral method. A benchmark of its kind! One of Alix's creative fantasies is the elegant silhouette of a Feast of the Angels, a sailing wine pampered for seven years. A rarity alluding to nuts and candied fruits supported by freshness and power in the mouth. Character we will of course find in Les Caprices d'Alix, a dry white wine in 100% Viognier, with a perfectly convincing southern inspiration. And if we had to conclude, it would be on Diva, advertised as the "flagship of Château de Terride" which grows the oldest vines on the estate to their optimum expression.